by Michael Franco
Prev NEXT
10 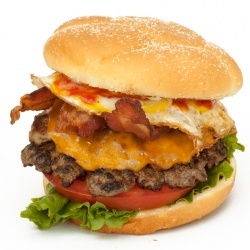 The Brunch Box feeds the hungry in Portland with big burgers like their Slaughterhouse IV.
David Bee/LightMotive Films

Street food is so prevalent in the progressive West Coast city of Portland that there's even a bicycle service that will deliver food from a list of vendors straight to your door (Portland Pedal Power). In fact, Portland took the No. 1 spot in a CNN list of the best street food in the world in 2010 [source: Robertson-Textor].

With more than 200 carts operating at any given time, it might seem like a daunting task to find just the right mobile meal, but fortunately, many of these carts are gathered in clusters throughout the city -- especially along the main routes of Southwest Alder and Washington streets [source: Portland Architecture].

At SW Alder and 9th you'll find Nong's Khao Man, which serves only one dish -- Khao Man Gai, the Thai equivalent of Hainanese chicken rice. Nong uses free-range chicken and local ingredients to make his dish, which he serves up to many a happy Portlander in butcher paper for just $6. Nong's global neighbors include Ziba's Pitas, which prepares delicious Bosnian food; Altengartz German Bratwurst, which keeps things simple with all-natural, hormone-free pork sausages; and Tito's 2, where $1.50 tacos make it hard to stop at just one.

Another major culinary cluster in Portland is along "Food Cart Alley" between Stark and Oak Streets on 5th Avenue. Here, the Brunch Box elevates the burger to high art. And "elevates" is the right word, as the creations are super-thick -- like the Slaughterhouse IV, complete with a beef patty, turkey patty, bacon, egg, cheddar cheese, lettuce, tomato and grilled onions. It's definitely enough food to fuel your search for a dessert cart!