by Nicholas Gerbis
Prev NEXT
9 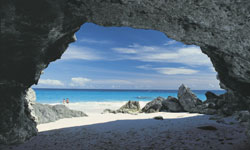 The Bermuda beaches are unmatched.
Comstock/Thinkstock

No list of island getaways would be complete without Bermuda. For years, it's been known as one of the best romantic getaways around. Located in the Atlantic Ocean approximately 650 miles (1,046 kilometers) east of North Carolina, Bermuda's perfect pink beaches are easily accessible by plane. For Americans on the eastern coast of the United State, flying to Bermuda is as effortless and cheap as flying within the country. It's also a favorite stop for cruise ships.

After soaking up some sun and surf, try hiking or biking the old right-of-way of the Bermuda Railway, since converted to an 18-mile (29 kilometer) long trail spanning three islands and offering amazing views. Then get in a little shopping in the current capital city of Hamilton or wander over to the old capital of St. George for a taste of historic Bermuda. While you're there, visit nearby Fort St. Catherine museum, which overlooks the beach where the ship Sea Venture ran itself aground in 1609, a key event in the history of the island colony. The fully restored Commissioner's House at Bermuda's Royal Naval Dockyards in Sandy's Parish offers another way to step back in time, to the heyday of British sea power in the Atlantic.