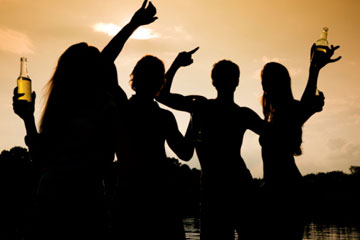 Image Gallery: Beaches What kinds of risks does your teen face on an unsupervised spring break trip? See pictures of beaches.
iStockphoto/Thinkstock

It's the sentence sure to fill even the most confident parent with fear and trepidation. Your teenager looks you in the eyes and says: "I want to go with the other kids on spring break to [insert some distant, dangerously debauched-sounding vacation locale here]."

OK, sure, you can give him or her an emphatic "no" and start quoting statistics about violent crime in said spring break locale and tell horror stories about teenagers who got drunk and drowned or fell from a hotel balcony. You know the likely response will be an angry "You never let me do ANYTHING!" plus three days of sulking and angry silence at breakfast. Most likely you'll feel at least a little bit awful. You'll have this growing suspicion that you really are the overprotective spoilsport your teen sees across the dining room table.

But there are good reasons you should stick to your guns on this one. And there are safer spring break alternatives, too. We'll get into that on the next page. But first, let's talk a little about spring break history.

It may seem hard to imagine, but there was a time in America when teens did far more dangerous stuff than beer bongs and baring their breasts in front of video cameras -- like operating heavy machinery in factories, sailing the world on merchant ships and fighting in wars. A child born in 1900 had close to a one-in-five chance of dying in infancy, so anybody who made it to adolescence was pretty much considered a mature grownup. It wasn't until the mid-20th century that rising affluence enabled teens to postpone entering adult life and enjoy a relatively carefree existence. Spring break trips to resort towns, celebrated by Hollywood movies like the 1960s film "Where the Boys Are" became a part of that.

By the mid-1980s, spring break had mushroomed into an industry, with 380,000 students cramming into cheap motel rooms in Fort Lauderdale, Fla., each April and spending $110 million to have a good time. MTV telecast the inebriated revelry so young teens could see what they had to look forward to.

But the most popular resort towns eventually tired of the havoc that throngs of young partiers created and began chasing them away by cracking down on their behavior. Spring break action gradually shifted to less glamorous, progressively edgier towns -- and across the border to Mexico, where the U.S. State Department estimates that 100,000 U.S. teens now spend spring break each year.

What risks does your teen face if he or she ventures to one of these spring break destinations?