10 Tips for Traveling with Kids on Airplanes

Browse the article 10 Tips for Traveling with Kids on Airplanes

It takes more than a window seat to distract kids during a long flight.
Ablestock.com/Thinkstock

Never-ending fees, strict security and shrinking seats have transformed the once-glamorous field of air travel into an ordeal that's guaranteed to stress even the most seasoned travelers. Add kids into the mix and you've found a surefire recipe for disaster. According to The New York Times, unruly children represent one of the top gripes for airline patrons. This leaves parents in the difficult position of coping with not only the demands of their own children, but also the wrath of other passengers. Before you resign yourself to driving to your destination or putting off long-distance trips until your kids are older, try these 10 tips for keeping the peace when traveling with kids on an airplane.

Read the next page to learn why you risk more than missing your flight when you show up to the airport with only minutes to spare.

A successful trip with your children begins before you book your flight. Air travel is hard enough when everything goes right, so don't open yourself up to delays and other major changes at the last minute. Whenever possible, choose the first flight of the day to avoid delays and missed connections. Booking nonstop flights is key when traveling with an infant, while a short layover allows older kids a chance to stretch their legs. Above all, allow yourself plenty of time for traveling to the airport, parking and getting yourself and your children to the plane. Knowing you have enough time for extra bathroom breaks or unexpected diaper changes can ease stress and make flying easier for the whole family.

Is It Safe To Hold My Child In My Lap?

According to the Federal Aviation Administration, the safest place for a child during turbulence or an emergency is in a hard-backed child-restraint system, not in your lap.

Nothing can ruin a flight faster than a bout of motion sickness. Set yourself up for success by making sure everyone eats a light meal or snack before boarding. Consider packing crackers or other snacks to soothe small tummies on the plane. If your children are prone to motion sickness or this is their first flight, choose seats above the wings for maximum stability. Antihistamines and other medications can also help reduce motion sickness, but check with your doctor first to ensure these medicines are safe for your kids. One final trick: Have your children wear sunglasses on the plane to reduce their field of vision and stop the nausea and dizziness that can sometimes come with air travel.

When it comes to flying with children, all airlines are not created equal. Before you book your tickets, compare different airlines to find ones that offer family-friendly policies. For example, Delta, Southwest, United and many other major airlines offer priority boarding for families so kids can get settled in, while American Airlines makes families wait to board with the rest of the passengers. Some companies offer kids' menus and child-friendly amenities, such as the free in-flight children's programming on American and Virgin Atlantic, while others offer only standard meals and movies aimed at adults. Some companies even make you check your stroller at the ticket counter, forcing you to carry your child and all your gear to the gate.

Above all, choose an airline that allows you to pick your seats before your flight. It's not uncommon for parents to arrive at the airport only to discover they're seated several rows away from their toddler. However, sometimes family-friendly airlines will waive seat-booking fees for parents traveling with young kids.

In April 2012, Malaysia Airlines announced that it would reserve the upper decks on certain flights for adults only. The airline also promised to provide a separate family-friendly section on lower decks, complete with games and other in-flight entertainment.

Even adolescents may act out if they're hungry.
Digital Vision/Photodisc/Getty Images

Ever notice how everything seems worse when you're hungry? A carry-on bag packed with your kids' favorite snacks can make air travel much easier to bear, particularly now that most airlines no longer offer kids' meals. Bring along enough sandwiches, fruit, chips and pretzels to keep everyone's stomach full throughout the flight, and be sure to pack sippy cups to help cut down on spills. Skip foods that could be messy -- like squeezable yogurt -- and remember that you can't bring liquids on the plane, so soups and spreads are out. While it's important to encourage healthy eating habits, an airplane trip is not the time for carrot sticks. Pack plenty of treats and fun foods to avoid adding a battle to this already stressful time.

You've probably heard horror stories about planes that have been diverted or delayed, leaving passengers trapped on board for much longer than expected. Now picture yourself in this scenario with a hungry baby who's desperately in need of a diaper change. To reduce your risk of disaster when flying with a child, always plan for the worst, and pack a carry-on that contains everything your kid might need to make it through the flight. Throw in plenty of diapers and wipes, and don't forget extra formula. Bring at least one change of clothes for your little one, as well as an extra set of clothing for yourself, just in case. If your child has a favorite toy or must-have item like a blanky, place it within easy reach so you can access it in a pinch. While you can't prevent delays and other disasters, you can make sure you're prepared to handle them and keep your kid and yourself as comfortable as possible in the meantime.

Stressed out about flying with your kids? Consider hiring an in-flight nanny to help keep your children entertained on the plane. Services such as Nanny in the Clouds help match plane-ready caregivers with families looking for assistance.

If it's a very small or privately chartered flight, you child may even get to sit in the cockpit for a few minutes!
Thomas Northcut/Lifesize/Thinkstock

No matter how old you are, air travel can be tough. Parents of older children may be surprised that a typically well-behaved preteen can regress to toddlerlike whining on a long flight. Keep older kids happy with a selection of gadgets they can use on the plane. Consider splurging on a portable DVD player, or pack a laptop or tablet so your kids can watch movies or shows onboard. Bring along a selection of movies, or let them download a few favorites before you board the plane. If your children like to read, have them pack a book or two in their carry-on, or download an audiobook to their MP3 player or mobile phone. Handheld video games and cell phone apps can also keep older children and teens entertained on a flight.

During takeoffs and landings, changes in air pressure can cause popping or pain in the ears. Kids are particularly vulnerable due to their smaller ear canals, which can trap air and allow pressure to build. To avoid earaches, keep babies awake during ascent and descent, even if this means waking them from a nap. Give younger children a bottle or pacifier to help alleviate pressure, and supply older kids with gum, snacks or drinks. Even making funny faces and talking to your kids can reduce the risk of ear pain. If your child is prone to earaches, a dose of Children's Tylenol prior to takeoff may help, but check with your doctor first just in case.

Avoiding Kids for a Fee?

In a 2011 survey, more than one-third of travelers reported that they'd be willing to pay extra to avoid sitting near children while flying.

That's right -- a book might occupy your child for longer than a video game!
Blaise Hayward/Taxi/Getty Images

DVD players or other electronics can be a lifesaver for parents flying with young children. Remember though, that you must turn these devices off during takeoff and landing. When you're sitting next to a cranky kid with nothing to do, the ascent and descent can seem to take an eternity. Keep kids entertained during this electronic-free period with some old-fashioned fun. Bring along a selection of storybooks to read to your child, or pack small toys, coloring books and travel games. A mini Etch-a-Sketch is both fun and portable, while a simple box of crayons can distract your child until you get the all-clear to use electronics. This is also a great time to play quiet games like I-Spy or to talk about all the exciting things you're going to do when you arrive at your destination.

Getting Kids to Sleep on the Plane

In a perfect world, your little ones would drift off to sleep the moment you strapped them into their seats, only to awaken as the plane touched down. While you're unlikely to experience this kind of luck, there are steps you can take to encourage kids to sleep peacefully during your flight. Whenever possible, schedule a flight during your child's regular naptime, or choose one that takes place overnight. This way, your kids will naturally be sleepy while in the air, and they might just drift off to dreamland. If scheduling a flight during naptime just isn't practical, use the time before your plane departs to wear kids out at the airport. Many airports now have children's play areas, while others offer fun exhibits to explore. If all else fails, find a relatively empty area and just let your kids run around to use up excess energy. Once you're onboard, a quick walk up and down the aisle can help quiet a crying baby or even distract an older child who's starting to get fussy.

To Medicate or Not to Medicate

Some parents swear by using Benadryl and other over-the-counter medicines to help kids sleep onboard a plane. While the American Academy of Pediatrics has no official stance on the topic, it's best to check with your pediatrician before trying this trick.

Pack a Stash of Surprises

Your child will want to show off her new toy to everyone.
Peter Dazeley/Riser/Getty Images

When it comes to flying with kids, the best-laid plan is no guarantee for a smooth and easy trip. Even kids who are well-fed and equipped with every imaginable source of entertainment can start to melt down after spending too long in the sky. Beat the airplane blues with a stash of small surprises to help distract your child. Before your flight, fill a bag with small, affordable presents that you can surprise your child with on the plane. Promise kids one present per hour on a long flight, or simply reach into your bag of tricks as needed to avert a crisis. You don't have to spend a fortune on these gifts either -- anything your child hasn't seen before can serve as a powerful distraction for a cranky young flyer. Wrap toy cars, dolls, rolls of stickers, colorful lollipops, coloring books or even miniature stuffed animals. You'll not only keep your kids busy, but also give them something to look forward to as you head toward your destination. 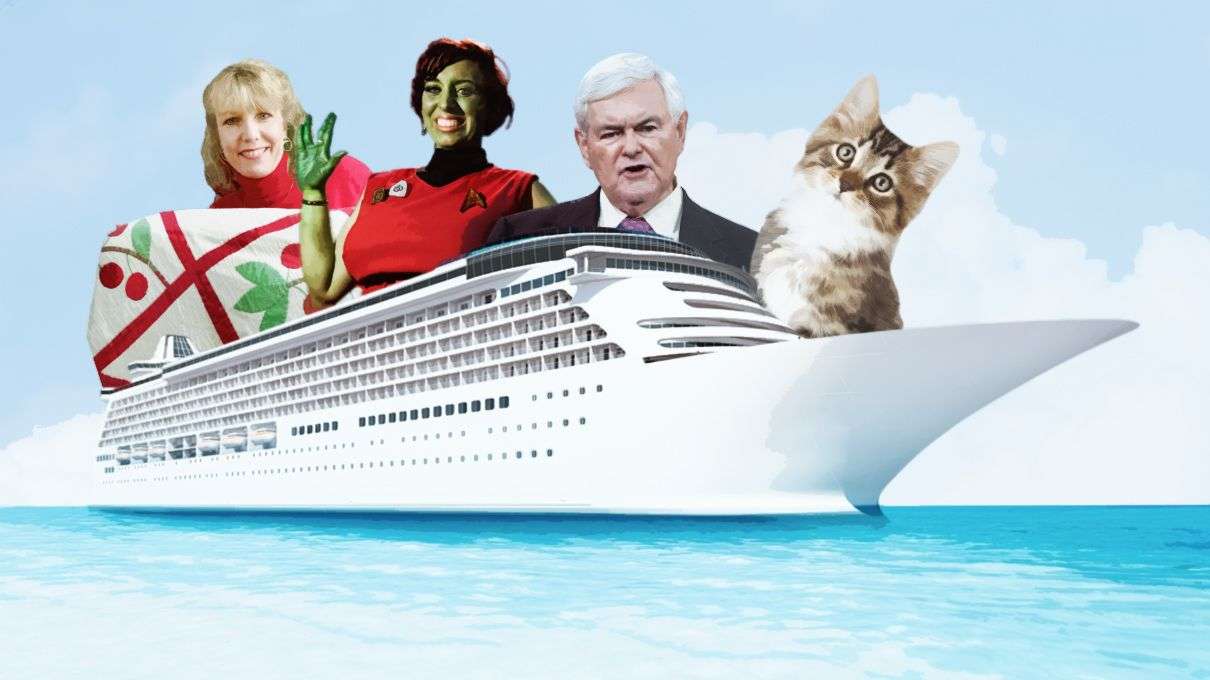