Browse the article A Guide to Hiking Wichita Mountains 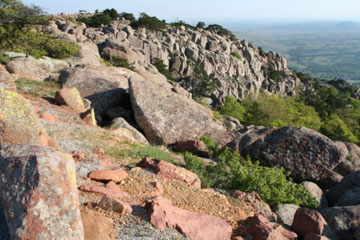 The view from the top of Mount Scott, part of the Wichita Mountain Wildlife Refuge in southwestern Oklahoma. See more pictures of national parks.
iStockphoto.com/Thinkstock

In southwestern Oklahoma, the rolling plains are interrupted by a ragged collection of granite outcrops and low, weathered mountains. Known as the Wichita Mountains and named for the tribe that had inhabited the area for centuries, these ancient peaks protect a nearly pristine nature area dotted with lakes, home to bison and longhorn cattle, and the location of some of the best mountain climbing in the U.S.

The history of the Wichita Mountains begins about 500 million years ago [source: U.S. Fish & Wildlife Service]. Extensive volcanic activity formed the dense rocks that make up much the area, including granite, rhyolite and gabbro. Geologic uplift formed the mountains themselves (which are old even for mountains), and hundreds of millions of years of weathering has not only worn them down but filled in the areas in between, making today's Wichita Mountains seem small compared to other mountain ranges (but positively towering compared to the plains around them, of course). However, the spectacular granite formations make up for their lack of stature.

Today, the Wichita Mountains Wildlife Refuge is managed by the U.S. Fish and Wildlife Service. You can visit the refuge for free to hike some of the trails and take photos of the bison, longhorn, elk or prairie dogs. You can camp there for a modest fee. Considering what a unique and beautiful place it is, it's really easy to visit and enjoy. This article will explore the wildlife you might meet there, the recreational activities you could participate in, and the region's place in the history of mountain climbing.

In 1901, about 60,000 acres (24,281 hectares) of the Comanche-Apache-Kiowa Indian Reservation were taken by the U.S. government and used to create the Wichita Mountains National Forest, under the care of the U.S. Forest Service [source: U.S. Fish & Wildlife Service]. The area has been passed among several different government agencies and changed names a few times over the decades.

Prior to the establishment of the national forest, the region had a rich and colorful history. It was the backdrop for skirmishes between Native Americans and American settlers, served as a hideout for bandits, and is even rumored to house buried treasure (none has ever been found, and it's illegal to look for it). There was a mini-gold rush in the late 1800s, but the Wichita Mountains have never been a serious source of that kind of buried treasure either.

Today the wildlife refuge is an area of great natural beauty. In addition to the mountains and lakes, it's also home to one of the only remaining areas of untouched mixed grass prairie in the U.S. In 1907, American bison were introduced to the refuge as a way to maintain the once nearly extinct species. Through careful management, the refuge maintains a herd of 650 animals, with excess bison sold off at auction to prevent the herd from growing too large and damaging the prairie [source: U.S. Fish & Wildlife Service]. A herd of longhorn cattle are kept here as well -- though they're not native to the area, the herd is kept as a living link to southwestern heritage.

Visitors may also encounter elk and prairie dogs in the Wichita Mountains Wildlife Refuge. Just remember that the refuge is not a zoo. Bison and elk can be very dangerous and do charge, so don't get too close.

The wildlife refuge isn't the only impressive nature area in Oklahoma – about 31 miles (50 kilometers) away is Quartz Mountain Nature Park, one of the most highly regarded mountain climbing sites in the U.S. We'll discuss that next. 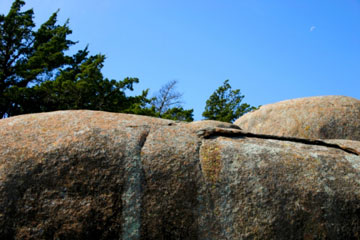 The Wichita Mountains are famous for their hiking trails and flatlands.
iStockphoto/Thinkstock

Quartz Mountain, also known as Baldy Point, sits on the shore of Lake Altus, a short distance northwest of the Wichita Mountains Wildlife Refuge. It's technically part of the Wichita Mountains range, though if you drive from one to the other you'll notice a lot of flat land in between. Quartz Mountain is beautiful in its own right, but if you're an avid climber, you're in for a real treat. Since the 1960s and 70s, free climbers have been ascending Quartz via an array of colorfully named routes, like "Hobbit," "Last of the Good Guys," and "Amazon Woman" [source: Wichita Mountains Climbers Coalition].

It's partly through the dedication of the climbing community that the Quartz Mountain Nature Park exists at all. The mountain was on private property for decades, but the landowner was friendly with the climbers and allowed them access. When the owner died, a coalition of climbers worked with his family to purchase the site, donate it to Oklahoma, and convert it into a Nature Park that would always be accessible to the public.

If you're not up for a free climb up a craggy cliff, you can still enjoy Lake Altus, along with hiking trails and quite a few more nearby attractions, like a golf course and a speedway.

Next we'll find out where to camp in the Wichita Mountains. And if you're not into roughing it, we'll check out some indoor lodging too.

If you like camping, the Wichita Mountains are a great place to visit. The Wichita Mountains Wildlife Refuge features the Doris Campground, which is your basic modern campground. There are sites for campers and motor homes, with or without electric, plus tent and group sites. As of 2012, fees range from $8 to $18 per night depending on the type of site. There's also the Fawn Creek Campground, which is set aside for youth groups.

If you're willing to put in the effort, backcountry camping will give you some serious seclusion in some of the refuge's most beautiful areas. For a small fee ($2), you can get a permit to hike into an area called Charon's Garden. It's named for the Greek mythological figure who ferried the souls of the dead to Hades, but despite the creepy name, it's a great spot for hiking and camping.

Quartz Mountain Nature Park has a campground that can accommodate tent campers for $7 per night. However, if camping isn't your style, there's the Quartz Mountain Lodge, a resort that's close to both Quartz Mountain and the Wichita Mountains Wildlife Refuge. There are cabins on the shore of Lake Altus as well. If you'd rather stay at a motel, there are lodgings available in the nearby towns of Altus and Lawton.

What are the most notable peaks in the Wichita Mountain range? Find out next.

Hiking Wichita Mountains: Mountains and Peaks You Should Know 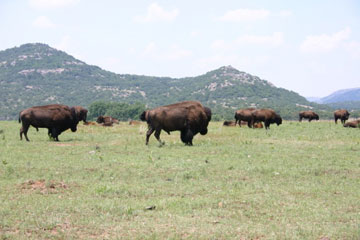 You'll never know what you'll see during a hike through the Wichita Mountains.
iStockphoto/Thinkstock

The Wichita Mountains are full of interesting mountains, peaks and trails. Topographical highlights include the following:

For more information on mountain climbing and hiking, see the links on the next page.

I've been to the city of Wichita, Kansas (once, to see a concert by the rock band Tool), but had never heard of the Wichita Mountains. I've also seen a preserved bison herd in Kansas, but to see them from the decidedly more impressive terrain of the Wichita Mountains would be pretty amazing. I'd love to hike into the refuge and camp for a few nights under the stars (imagine how many stars you can see out there with no major cities nearby). Next time I'm in that part of the country, it's on my to-do list.