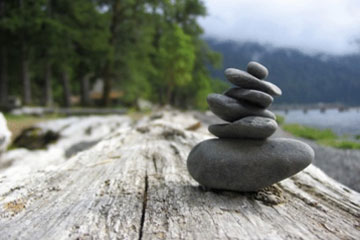 This seemingly innocuous pile of rocks could be a warning for unsuspecting hikers. See pictures of national parks.
iStockphoto/Thinkstock

You may have heard the word "trailblazer" used in reference to folks like Galileo, Nikola Tesla or Pablo Picasso -- folks who forged beyond the common knowledge of their times to discover something new. But do you know where that idiom came from?

While those of us who don't venture into the backcountry on a regular basis may know the term best in its figurative sense, in the wilderness, a blaze is a type of marking that establishes a trail for other hikers [source: Martin]. While Tesla and Picasso were intellectual and artistic trailblazers, these outdoor adventurers blaze their trails literally as well.

No matter what form trail markings take, their ultimate goal is to communicate two basic pieces of information: where a hiker is currently, and where he needs to go next. On most trails, blazes appear on both sides of the path, indicating that the trail is usable in both directions. This may seem intuitive, but some trails simply can't be taken backward and forward: Hunters often use blind or one-way trails that can be dangerous for the casual hiker [source: Seton]. If you're on a trail with carved markings, it's even more important to note these double signs: Animals often leave claw marks on trees that can look suspiciously like legitimate trail markers [source: Harlin]. So if you see what looks like a sign that's only on one side of a tree, you might want to take a second look before following the marking into a suspicious-looking swamp. (We'll explore those further on the next page.)

So what does that painted line on the tree mean, and are those three tufts of grass actually telling you to turn left? Read on to find out what trail markings actually mean.

The most common types of trail markings are called blazes, a term that can also refer to trail markings in general. You'll find two main types of blazes out on a trail: paint blazes, which are symbols painted on trees, or carved blazes, which are chiseled into trees or rocks on the side of a path. Coloration can vary from location to location, but standard blazes are usually marked in white paint [source: Seton].

Cairns, or rock ducks, are carefully arranged piles of rocks that guide hikers in areas where there are no trees or where visibility is poor [source: Holland]. Standard cairns use a small two-stone pyramid, which is augmented to communicate different messages. Although not used as commonly today, some Native American tribes also used twigs and grass as trail markings [source: Seton].

The language of trail markings includes three essential pieces of information: the starts of a trail, directions (turn right or left), and warnings. Many trails also use reassurance blazes, which let hikers know that they haven't ventured off their path [source: Pennsylvania Department of Conservation and Natural Resources].

Even if you didn't read this article before heading out on a trek through the wilderness, you'd probably be able to guess what most trail markers mean. Although they vary slightly from method to method, markers generally follow the same pattern:

As a rule, blazes should be placed around 200 to 300 yards (183 to 274 meters) apart. However, that can vary depending on the difficulty of the trail: If the path is naturally easy to identify, blaze frequency can be reduced, and vice versa. Regardless of frequency, all trail markings should be made in regular intervals [sources: Pennsylvania Department of Conservation and Natural Resources, Tennessee Department of Environment and Conservation].

Blazing too little can cause confusion for hikers, but can you blaze too much? We'll explore over-blazing and the environmental concerns associated with it on the next page. 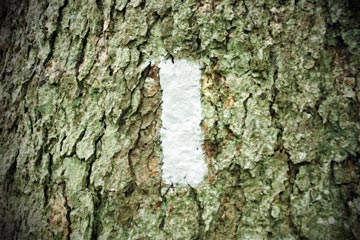 What does this marker tell hikers?
iStockphoto/Thinkstock

But trailblazing raises some ethical questions as well. Most parks in the U.S. abide by some version of the Leave No Trace (LNT) philosophy, a set of principles promoting the responsible and ethical enjoyment of the outdoors. LNT emphasizes the importance of things like respecting wildlife, disposing of trash and minimizing evidence of human presence in the wilderness [source: Leave No Trace Center for Outdoor Ethics].

It's this last principle that makes trailblazing tricky, because one of the main purposes of trail markings is in fact to display a human presence. Moreover, the methods used to mark trails -- most commonly, paint and carving -- could easily be considered defacement if they communicated messages like "Brad + Angelina 4eva" instead of important trail instructions. Plus, there's a fine line between reassuring hikers that they're heading the right way and doing it like an impatient three-year-old on a long car ride: Constant signage is not only detrimental to the environment, but it also detracts from the natural experience.

Want to learn more about trail markings and how to be an educated, environmentally conscious hiker? Explore the links on the next page.

I love the outdoors, but I guess I love hot water and my own bed more, so I've never ventured far enough into the wilderness that I needed to know how to read trail markings. It was pretty reassuring to learn how intuitive they were, just in case I ever take a wrong turn and find myself navigating the road less traveled! I also found it interesting that there's far more information online about scientific, artistic, and historical trail blazing than I found about the literal, scratching-marks-into-trees kind. Definitely an interesting topic -- and one I'd love to learn more about.