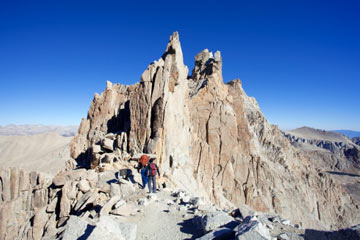 Mount Whitney is the highest mountain in the lower 48 United States, and hikers can ascend to its 14,494-foot (4,418-meter) peak.
Mark Lewis/Photodisc/Getty Images

In Spanish, Sierra Nevada means snow-covered mountain range. And sure enough, the Sierras don't fool around when it comes to frozen precipitation. In 1991, the Tamarack area between Lake Tahoe and Yosemite set a record when it got 32.5 feet (9.9 meters) of snow in one month. Some of the highest Sierra elevations are snow-covered well into the summer [source: Virtual Museum].

In addition to snow, the feature that dominates the Sierra landscape is granite. The range was formed from an enormous block of granite, raised and tilted by geological forces over many eons. Then, glaciers and water set to work, stripping away much of the sedimentary rock at the surface and sculpting the granite bedrock below. What's left is a westward sloping range of craggy peaks, slashed by deep canyons and cliffs.

The highest mountains are in the southern Sierras, and the wide-open vistas above the tree line there are a hiker's dream. Mount Whitney is the highest of them all, and the ascent to the top of the 14,494-foot (4,418-meter) peak can be made as a long day hike or as a two-day backpacking trip [source: USGA].

Rivers are an important part of the Sierra Nevada terrain. In spring, 15 major river systems and watersheds carry water from melting snow down the slopes, deepening canyons and providing 60 percent of California's water through a system of canals and aqueducts [source: Virtual Museum].

Plants are a distinctive part of the Sierra landscape. Hikers come from around the world to view the trees, which include towering ponderosa pines and the monumental sequoias. Some of the sequoias, a type of redwood, are 3,500 years old. The General Sherman tree in Sequoia National Park is 272 feet (83 meters) high and 27.5 feet (8.4 meters) in diameter [source: Virtual Museum]. At higher elevations, lodgepole pines and mountain hemlocks twist into baroque forms.

As you hike through the Sierras, you'll encounter a fascinating variety of terrain and landscape features. For example, there are 100 small glaciers -- the southernmost glaciers in the U.S. -- scattered through the high peaks. They reside among the alpine lakes of the region, which are defined as lakes above 5,000 feet. Lake Tahoe is the most famous of them. You'll also find caves carved out of marble -- Crystal Cave in Sequoia National Park is one that allows tours. In other parts of the Sierras, you'll find deep canyons, waterfalls, volcanic rock and hot springs.

If your hiking feet are eager to get on the trail, read on to check out the accommodations that are available in the Sierras.