A Guide to Hiking in Sequoia National Park

Browse the article A Guide to Hiking in Sequoia National Park 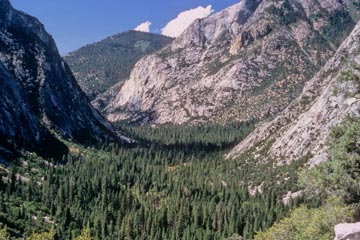 If there is such a thing as hiker heaven, California probably comes pretty close. With such a wide assortment of natural wonders, an outdoor enthusiast would be hard pressed to experience all that the Golden State has to offer in a single lifetime. California scenic spots include Yosemite, the Redwood Forest, Muir Woods, Death Valley, and so many more amazing hiking opportunities. It also includes Sequoia National Park, one of the best hiking and backpacking destinations in the world.

What makes Sequoia so special? For starters, there are the majestic snow-capped Sierra Nevada Mountains that tower between glacier-carved canyons and flower-filled meadows. Here, you can explore diverse environments, encountering an astonishing array of wildlife and mingling amidst the giant sequoia trees. And then there are the views – sweeping vistas of rugged peaks set below the clear blue California sky. And while Sequoia is a popular hiking destination, its wilderness settings are somehow both massive and intimate – the park spans more than 400,000 acres (162,000 hectares), but has plenty of nooks, glades, and overlooks for quiet reflection [source: Sequoia Natural History Association].

Humans have been exploring Sequoia National Park's mountains and foothills for at least 6,000 to 7,000 years. Sequoia and its northern neighbor, Kings Canyon National Park, are rich in archeological treasure, containing hundreds of Native American sites and other historic points of interest [source: National Park Service]. In the mid-1800s, European explorers flocked to these forests and soon began to bicker over its riches. In 1890, Sequoia was established as a national park, and today more than 90 percent of it is designated wilderness, which prohibits the building of roads and permanent structures as well as exploitative activities such as logging, hunting, and mining [source: National Park Service and Wilderness Society].

Happily, one of the best features of Sequoia National Park is its accessibility. Like many of California's parks and forests, Sequoia is a short drive from the major metropolitan areas of San Francisco and Los Angeles. This makes it an ideal getaway for millions of people who want to enjoy amazing day hikes, awesome wildlife-watching excursions, and some of the best backcountry hiking in the world. We explore each of these in the next section. 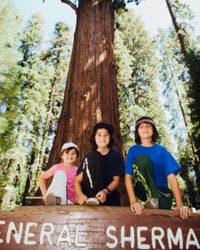 No trip to Sequoia would be complete without visiting the General Sherman Tree, the world’s largest living tree at 275 feet (84 meters).
Alan Levenson/Workbook Stock/Getty Images

With the vast majority of Sequoia designated as wilderness, this national park is a nature-lovers playground. Sequoia offers a wide range of hiking experiences – visitors can meander through a meadow, tackle one of many adrenaline-rushing climbs, or embark on a fabulous multi-day backpacking adventure. The added bonus is that Sequoia has a series of well-marked trails, which makes staying on track a breeze in this wilderness wonderland [source: Crapsey].

With any wilderness area, there are several important considerations for visitors to Sequoia. Hikers are expected to abide by minimal impact restrictions, such as staying on existing trails, camping on bare ground, and packing out all trash [source: National Park Service]. There is also a strict "no pets" rule in Sequoia for the safety of wildlife. Hikers should also keep in mind that day trips do not require a permit, but any overnight stay requires a wilderness permit, which may be obtained at ranger stations and visitor centers [source: National Park Service].

Safety is a very important issue for hikers in the Sequoia. Much of this park is vast and rugged terrain that is best explored with a buddy or in a group. Also, be sure to let someone back home know where you're going and when you intend to return. Hiking in the Sierra is a lovely experience, but it's not without potential pitfalls. To stay safe and remain healthy, you'll need to purify your drinking water and either store your food in air-tight containers or (preferably) in the many bear boxes scattered throughout the park [source: National Park Service].

While Sequoia National Park has so many amazing trails and jaw-dropping sights to choose from, there are certain "must see" destinations in this pristine mountain paradise, including wonderful flower-filled meadows in the foothills, centuries-old giant sequoia trees, and the massive Mount Whitney, the tallest mountain in the contiguous US [source: United States Geological Survey]. We explore each of these in the next section.

There are so many reasons to visit the Sequoia National Park, and perhaps the best reason is its fabulous hiking trails. Visitors can enjoy an amazing view of towering giant sequoia trees along on the Trail of the Sequoias, one of the most popular trails in the park. The Trail of the Sequoias begins at the famous General Sherman Tree and continues though the Giant Forest, which contains many of the largest trees in the park [source: Hiking Trailer] Some are as tall as 26 story buildings.

The Trail of the Sequoias meets the Crescent Meadow Trail, another amazing though less challenging hiking experience that is also kid-friendly. This trail meanders gently through lush and sunny greenery and takes hikers past several downed Sequoias, including one that visitors can climb into and one that has been converted into a cabin [source: Hike's Peak]. This trial is also a wildflower wonder, particularly in spring [source: Crapsey].

Another popular trail is the High Sierra Trail, most of which is manageable for the average fit backpacker [source: Crapsey]. The High Sierra begins in Crescent Meadow, passes through the Great Western Divide, and ends at the summit of Mount Whitney (14,494 feet, or 455 meters), offering some of the most breathtaking views known to man [source: National Park Service and Crapsey]. However, keep in mind that the Great Western Divide, a double crested row of the tallest, most rugged peaks in the Sierras, blocks the view of Mount Whitney along most of the High Sierra Trail [source: Challenge of the Big Trees].

Sequoia National Park is a fantastic experience for hikers of all skill levels. You probably won't begin to appreciate its splendor in just one trip, so plan to visit often. Keep in mind that Sequoia's convenient shuttle service means you can hike from one end a trail to the other without having to retrace your footsteps since many of its trails are stretches, not loops [source: Crapsey]. You should also check the weather report before you go – visitors to Sequoia usually enjoy the best conditions between May and November. On the other hand, planning your trip to avoid the summer crowds can be a great way to enjoy the park in all its quiet and pristine glory.

No one knows the exact age of the giant sequoia trees in Sequoia National Park, but some of the largest are estimated to be about 2,700 years old [source: National Park Service].

Hikers in California flock to places like the Redwood and Yosemite National parks, neglecting some of the lesser known parks, forests, and wildernesses. While there is no mistaking the appeal of these destinations, not exploring other options is a mistake. Sequoia National Park and its neighbor to the north, Kings Canyon National Park, offer stunning views, an abundance of flora and fauna, and great hiking at all levels. Best of all, they're far less crowded than their more popular sister parks. If you haven't been to Sequoia, it is well worth the trip.