A Guide to Hiking the Santa Rosa Mountains 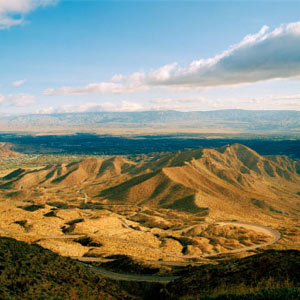 A view of the Coachella Valley from Highway 74
©iStockphoto.com/Lawrence Freytag

The Indian Canyons mark part of the divide between Santa Rosa and San Jacinto, which is noticeable for the exposed bedrock along the fault. So-named for their rich native history, the trails date back to pre-American times, and were used by the local Cahuilla Indians to travel between the valley and mountains. Palm Canyon Trail is a strenuous 16 miles (25.7 kilometers), with various shorter loops possible via other trails, and it includes an elevation change of 3,566 feet (1,087 meters) from bottom to top [source: USDI: BLM].

It moves from the Indian Canyons trading post all the way to Highway 74, or the length of the Northern range, and reflects the whole terrain transition from the Sonoran desert to cooler forests of pinon and juniper trees, moving from oasis to oasis. Although it's still sometimes called the "Trail of a Thousand Shrines" for the native archeological discoveries that have been made there, the shrines are mostly lost now, so hikers are warned to leave special finds intact.

Another moderately strenuous trail, the Art Smith, is 8.3 miles (13.4 kilometers) long, with an elevation change of 1,465 feet (447 meters) [source: USDI: BLM]. Famously offering vistas of Coachella Valley and the Joshua Tree National Park, it was named for one of the leaders of the Desert Riders equestrian club, which still cares for the trail. Similar in length and elevation is the "Hoppy" -- Hopalong Cassidy Trail -- which was, of course, named for the fictional cowboy. It moves near and through more developed areas while also working its way around mountainsides in a challenging roller-coaster-like system of switchbacks. While there are plenty of connecting trails you can use to create shorter hikes, anything south of Homme-Adams Park is for experts only.

There's a complex of strenuous, but shorter, trails -- beginning with the moderate and enjoyable-on-its-own Wild Horse Trail -- that focus on Murray Hill, an iconic peak south of Palm Springs. The only way up the peak itself is via the Clara Burgess Trail, which is just 2.2 miles (3.5 kilometers) long but takes you a full 1,339 feet (408 meters) upwards, in total. Compare that to the much longer trails above, and it's clear that Clara Burgess should only be attempted by the hardiest explorers with the most time to spend on switchbacks and harsh terrain [source: USDI: BLM]. If attempting the north side of Murray Hill, be very sure you know the route. Those trails near the bottom of the peak can confuse even locals.

If you're looking for a family adventure in the North range, try the trail to Gunsight Rock. It's about 5.6 miles (9 kilometers) long, so it can take up to three hours to hike in the spring, but it's well worth the preparation and challenge. The rock features are fascinating, and on a clear day you can see all the way to the Golden Gate Bridge.