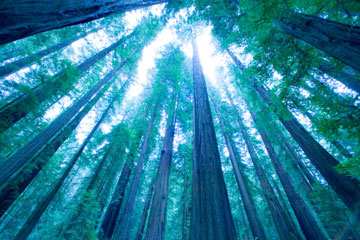 If the previous descriptions of the Pacific Crest Trail scared you off with their ruggedness, this might be the section for you. Oregon's 430 miles (692 kilometers) are the easiest on the entire PCT, with gentle climbs and well-graded paths that run through cool, shady woods. Thru-hikers often are able to put in their first 30- and even 40-mile (48- to 64-kilometer) days here [source: Pacific Coast Trail].

The landscape is still volcanic; you'll see volcanoes along the skyline such as Mount Hood, Mount Jefferson, the Three Sisters and Diamond Peak. But it's not stark. Near Mount Hood, for example, you can spot pinedrops and prince's pine in the dense forests filled with Douglas, silver and noble fir, then pasque flowers and fireweed growing in the frequent open areas. Throughout the trail, squirrels, beaver, fox, deer, elk, nutcrackers and grouse can be seen and heard, and there's an abundance of berries to sustain you: blackberries, huckleberries and salmonberries, to name a few [source: USDA Forest Service, Hanson].

One of Oregon's highlights is Mount Hood, the state's largest, most active volcano. Many summer hikers are surprised when the PCT runs under a ski lift near the Mount Hood Lodge -- and there are skiers and snowboarders on the slopes [source: Hanson]! Another popular spot for hikers is the passage through Crater Lake National Park, home to Crater Lake, the deepest lake in the U.S. and seventh deepest in the world. Take the Hiker PCT spur trail if you want to go right to the rim of this stunning lake [source: USDA Forest Service].

Before you leave the state, take a detour off the PCT onto the popular Eagle Creek Trail, which passes deep pools and cascades as it runs along a narrow gorge, then leads you through a tunnel carved behind a waterfall. Nearby is this section's only major elevation change -- when the trail plunges 3,160 feet (963 meters) into the Columbia River Scenic Gorge to cross the Columbia River via the Bridge of the Gods and leave Oregon behind [source: Hanson].