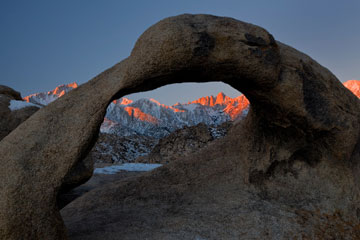 Serious mountain climbers will want to make their way up on the steep east side. However, everyday hikers will enjoy the more leisurely trails on the west side.

The original trail, called Mount Whitney Trail, is still the most popular and easiest. Thankfully, during the 1930s, a road was constructed leading up to the current trailhead, Whitney Portal. The old trail between the local town of Lone Pine and Whitney Portal is now a National Historic Trail of the Smithsonian Institute. When accessing Whitney Portal in your car, be aware that the last six miles (10 kilometers) of road may not be plowed and passable during the winter months (often November through March).

Trailhead elevation is 8,365 feet (2,550 meters) above sea level. Starting at Whitney Portal, the trail to the peak is nearly 11 miles (18 kilometers). As it's a strenuous trip to pack into one day, most hikers take a more leisurely pace and camp overnight. The trail will take you by Lone Pine Lake, Big Horn Sheep Park, an Outpost Camp area, Mirror Lake, Trailside Meadow and finally the main camp area. After a good night's rest, it isn't far to the Trail Crest, where you'll enter Sequoia National Park and walk behind Mount Muir and Mount Whitney's subsidiary needles before reaching the summit.

The second most popular route is the Mountaineer's Route, which is best for seasoned mountain climbers and especially popular in winter and early spring. A more direct route than Mount Whitney Trail, the Mountaineer's Route is also a more technical hike that will require special equipment. Another less trafficked route is the High Sierra Trail, which starts on the west side of Sequoia National Park and takes at least six days in all. 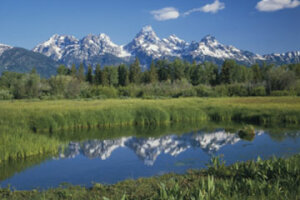 A Guide to Hiking at Grand Teton National Park