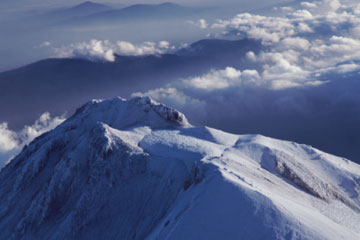 Depending on the season, Mount Shasta is prone to avalanches.
Barrie Rokeach/Riser/Getty Images

Hike the trails on Mount Shasta, and there's no doubt you'll encounter scenic surroundings and occasionally technical paths. But you'll also be traipsing an active volcano that erupted as recently as 200 years ago. In fact, according to the U.S. Geological Survey, there's a one in four chance it will erupt again [source: Sabalow].

The dangers most hikers encounter, however, are the risks of avalanche and weather fluctuations rather than lava flow. Mount Shasta is prone to rock slides, and the areas in which these occur can change from season to season. It's a good idea to check in with a ranger's station for an update before taking to the trails.

Like many mountains, Shasta has a microclimate that creates its own weather patterns. Because of the changes in elevation from the base of the mountain to the tip, temperatures can drop from 90 degrees Fahrenheit (32 degrees Celsius) to the single digits during a single ascent. And because of the way the mountain's vertical surface affects airflow, it's possible to have heavy snow on one side of the mountain and just a few misty sprinkles on the other -- all from the same clouds [source: Groleau].

Although you can hike Mount Shasta year-round, its busiest season is from May through September, which is when the campgrounds are open. If you're summit-bound, it's easiest to reach the summit when the trails are snow-packed but the weather's not too harsh. These optimal conditions usually occur March through mid-July. By the end of summer, hikers will encounter loose rocks rather than snow on the trails, and this can make it slow going.

For lots more information on hiking, see the links below.