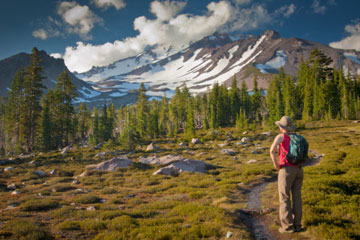 There's more to Mount Shasta than, well, Mount Shasta. Take the Shasta-Trinity National Forest, for example. The 2.1 million-acre spread covers five wilderness areas, including Mount Shasta, and features 460 miles (740 kilometers) of trails -- more than enough to whet your appetite for your next outing. There are a number of subordinate peaks on Mount Shasta that feature stellar hikes, too.

Shastina. Nearly a mile northwest of Mount Shasta, yet connected by a massive saddle of soil and rock, the Shastina summit rises to 12,330 feet (3,758 meters). It's the third tallest peak in the Cascade Range, bested only by Mount Shasta and, to the north, Mount Rainier. To reach it, you'll need to go through Hidden Valley to the Bunny Flat trailhead and then ascend the Cascade Gulch trail or the more challenging Lightning Bolt trail. Regardless of route, the climb is worth it: There's a sizeable crater at the Shastina peak that's home to a body of water known as Clarence King Lake. When not iced over, the water is a brilliant turquoise hue. Other points of interest on Shastina include Sisson Lake, another small body of water in the saddle that connects Shastina and Shasta, and Diller Canyon, a favorite of skiers. The trails on Shastina are ideal for beginners, but experienced hikers sometimes use them as a warm-up before attempting a climb to Mount Shasta's pinnacle.

Shastarama Point. On the south side of Mount Shasta, you'll find Shastarama Point. A more challenging hike than Shastina because of its vertical ascent and less-traveled scree- or snow-layered trails, at 11,135 feet (3,393 meters), Shastarama Point lies along Sargents Ridge. To reach it, you'll need to ascend the Old Ski Bowl trail, then veer right and follow the Sargents Ridge trail to Shastarama Point. Be sure to make a stop at the Southgate Meadows, situated along the ridge's east side, to take in some of the mountain's most memorable views [source: Mount Shasta Avalanche Center].

Green Butte. Also to the south of Mount Shasta, Green Butte is the tallest in a series of buttes known by color. Green Butte has an elevation of 9,193 feet (2,802 meters) and is directly above the Old Ski Bowl parking lot and its non-maintained ascent. The Green Butte hike is more challenging than that of Shastina, but similar to that of Shastarama Point. For a less vertical hike, you can reach Green Butte from a 1.3-mile (2.1-kilometer) trail that goes cross-country from Horse Camp [source: Mount Shasta Trail Association].