A Guide to Long Trail Hiking

by Becky Striepe
NEXT PAGE 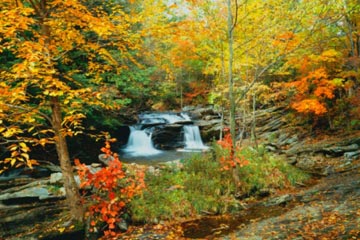 A small cascading waterfall flows down the rocks in the Green Mountains of Vermont.
Ron and Patty Thomas /Photographer's Choice/Getty Images

When forester Benton Mackaye was conceiving the Appalachian Trail in 1921, he drew inspiration from an earlier path – Vermont's Long Trail [source: Compos]. The first long-distance hiking trail in America, the Long Trail is a beautiful but tough hike over dozens of mountains, and for many seasoned hikers, completing its entire 273-mile (439-kilometer) length is a badge of honor.

The Green Mountain Club, a group of local conservationists, established the trail between 1910 and 1930, and they maintain it to this day [source: Green Mountain Club]. The south end of the trail is right on the Massachusetts/Vermont border and it cuts straight up the middle of the state through the Green Mountains, ending at the Vermont/Canada border. The trail heads through lush wooded areas, over mountain peaks where you can see the stunning Green Mountains, and even dips up into arctic tundra at a couple of points. The Long Trail is popular for its areas of unspoiled wilderness, dramatic changes in elevation, and for the path over Mount Mansfield, the highest mountain in Vermont [source: SummitPost].

The Green Mountain Club also maintains nearly 70 primitive shelters along the trail to accommodate camping, and they're savvily spaced so that you can hike from one to the next in just a day. That means you can camp in shelters all the way from Massachusetts to Canada, which is pretty handy! You still need camping gear, of course -- especially if you're thru-hiking -- but the shelters keep you dry and out of the mud if you hit inclement weather on your hike. The Long Trail can get pretty muddy from snow melt and rain, so a dry place to camp is a definite plus [source: Werner]!

Day hikers can take up-and-back routes to landmarks along the way or map out loops that take them down side trails without having to double back. If you're looking for something longer than a day hike, good trail maps are a must.