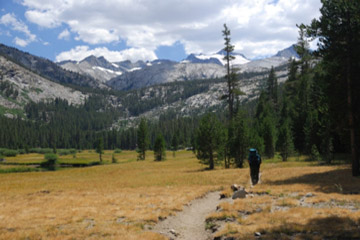 The John Muir Trail is one of the most popular and well-known hiking trails in the U.S.
©iStockphoto.com/Thinkstock

John Muir (1838-1914) is still one of the world's most renowned naturalists and environmentalists -- and with good reason. He dedicated his life to nature and its preservation by founding and serving as President of the Sierra Club and spearheading conservation efforts that eventually led to the establishment of the U.S. National Parks Program. He even went so far as to spend three days camping in Yosemite with President Teddy Roosevelt make his case [source: The Sierra Club]!

In 1915, the year after Muir's death, the Sierra Club began constructing the iconic trail that would be named in his honor -- a stretch of more than 200 miles (322 kilometers) that spans three national parks [source: The Sierra Club]. In 1938, the trail was completed, and it remains one of the most popular and highly regarded hikes in the world today. Wooed by Muir's impassioned writings -- not to mention some of the most beautiful scenery in the U.S. -- nature aficionados hike the John Muir Trail to connect with what author James Vlahos calls Muir's "enhanced sense of discovery [...] to not just see the mountains but to feel them" [source: Vlahos].

If you hike the John Muir Trail (affectionately known as the JMT), you'll encounter the mountains that Muir himself treasured most. We'll explore the trail's topography on the next page. 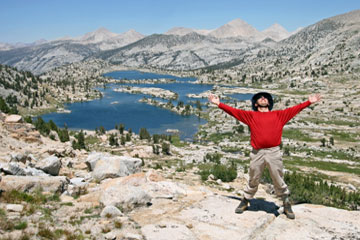 Hiking the John Muir Trail is a challenge to even the most experienced backpackers.
©iStockphoto.com/Thinkstock

By virtue of its length alone, the JMT offers a challenge to even seasoned backpackers. However, there's no better way to acquaint yourself with the California Sierras and the many stunning sights contained within.

If you're hiking north to south, as most do, you'll begin in the Yosemite Valley. The valley is home to Half Dome, a sheer rock peak that stands about 5,000 feet (1.52 kilometers) above the valley floor (and nearly 9,000 feet, or 2.74 kilometers, above sea level) and is the subject of one of Ansel Adams' most famous photographs [source: National Park Service]. Other notable sights in Yosemite include Vernal and Nevada Falls.

A good stopping point is Tuolumne Meadows, a rare stretch of flat greenery that explodes into wildflowers in the spring. The site also has a café and general store -- not terribly rugged, but good for rest and refueling before leaving the park. As you head south to enter Inyo National Forest on the trail's first major pass, you'll see a number of lakes nestled beneath the mountains. Further south is the Devil's Postpile National Monument, massive columns made of volcanic rock reaching heights of 60 feet (18.3 meters) [source: National Park Foundation].

The second major pass on the JMT is the Silver Pass, which winds hikers through a variety of creeks, lakes, and the occasional meadow on the way to the last opportunity to stock up on supplies at Muir Trail Ranch. What is until this point a relatively easy trail, moderate in incline, becomes increasingly challenging as Mount Whitney draws closer.

If you feel a little daunted by the notion of climbing the highest peak in the lower 48 states immediately after already trekking through three national parks, don't worry. Since the JMT is so expansive, some hikers choose to split their journey into sections, whether taking time to rest at the resorts that dot the trail sporadically or returning months or years later to complete another leg.

So what's the best time to visit the JMT? Read on to find out the ups and downs and what you can expect to see during each season. 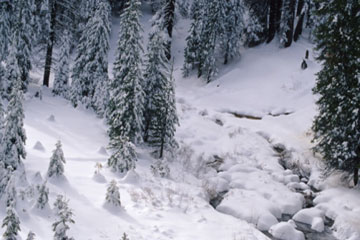 The John Muir Trail is gorgeous in winter, but hiking it can be dangerous once the temperature dips.
©iStockphoto.com/Thinkstock

If you're truly looking for solitude on the JMT, the time to come is winter, when snowfall and chilly temperatures -- which often drop below freezing -- deter many would-be hikers. Sunny but crisp days are interspersed with heavy snowfall from December through March, but expect rain and snow to begin in October and last as late as April.

Whether you love snow or are just bent on celebrating Christmas on Mount Whitney, consider the following tips before you pack up for your winter on the JMT:

There are no truly bad seasons to hike the JMT, but prospective hikers need only to read a few Jack London stories to fully understand the import of winter preparedness on a long excursion like this. First-timers may be better off -- not to mention safer -- hiking in summer.

If you love the California Sierras, there's plenty more to learn about the John Muir Trail. Explore lots more information about the trail -- and Muir himself -- on the next page.