A Guide to Hiking the Grand Canyon 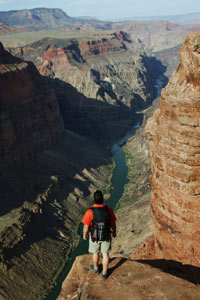 Hiking from one side of the canyon to the other is no small feat. To make the most of it, make sure you plan rest time on the canyon floor.
©Getty Images/Jupiter Images/Thinkstock

The rim-to-rim trip is, of course, the fullest experience a hiker can have in the Grand Canyon, coming into contact with every ecological zone and seeing every possible kind of sight available. It's a tough trek, but a rewarding one, and not something that very many people will ever experience. Keep in mind that the North Rim is only safe to hike during the mid-May to October season -- officially, the North Rim closes at the first snow each year. If you choose to take a rim-to-rim hike, it's probably best to start on the North Rim for your descent hike and take one of the South Rim trails back up.

The canyon's three major trails -- Bright Angel, South Kaibab and North Kaibab -- mean you have several options, should you take on this challenge. Between the free shuttles each morning and the variety of lodging available on both sides of the rim, and depending on the time of year, you can mix and match the trails however you like.

Rim-to-rim is, of necessity, also the longest amount of time you're likely to spend in the Canyon. Even after a regular South Rim trip to the bottom, it's important to treat yourself, on non-hiking days, to some relaxation among the canyon floor's attractions and amenities. You don't want to be so consumed with the activity of the descent and climb that you forget to look around! Choosing such a serious route is admirable, but don't let it overshadow the reason you've come to the park in the first place.