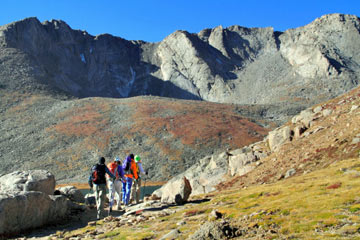 When you're hiking the Continental Divide Trail, your focus probably isn't on the trail itself -- it's on the surrounding landscape and views.
John Kieffer/Getty Images

When you're hiking on a good trail, your focus probably isn't on the trail itself -- it's on the surrounding landscape and views. But an enormous amount of behind-the-scenes work and money goes into building trails, especially one that's as long as the Continental Divide Trail. Most national scenic trails depend on nonprofit organizations to blaze the trail, so to speak. These groups typically raise funds, pull together volunteers, provide support to government agencies and generally make sure that trails are safe and well cared for.

Unfortunately, in late 2011, the Continental Divide Trail Alliance -- the main nonprofit organization supporting the trail -- disbanded due to lack of funds. This is of course very bad news for the trail, especially considering that more than 800 miles (1,287 kilometers) of the trail still remain to be constructed. Prior to the formation of the CDTA, trail construction was moving at a sluggish pace because there wasn't a unifying force to help spearhead its development. In its 17 years, the CDTA helped to build 525 miles (844.9 kilometers) of new trail and to raise awareness.

"Increasing pressures from development in the West, rising land costs, and challenges with the longstanding down cycle in the economy threaten the completion of the Trail," wrote the CDTA in a statement [source: CDTA].

In 1995, Bruce Ward, the former president of the CDTA, founded the organization with his wife Paula. In its more than 30 year history, the trail regularly faced funding challenges, and Ward had to get creative with fundraising, getting corporate backing from big outdoor apparel brands. In a controversial move, the CDTA even allowed some sponsors permission to put corporate logos on signs along the trail. But ultimately, even creative funding strategies couldn't keep the CDTA afloat [source: Wilmsen].

With Continental Divide Trail Alliance out of the picture, the future looks somewhat uncertain for the CDT, but one thing remains almost certain: that people will continue to hike along America's backbone, through some of the most majestic natural scenery in North America. Despite the CDTA's surprise dissolution, work on the Continental Divide Trail continues. Various organizations in the five states the trail passes through are taking up the cause of completing trail. So far, groups like Volunteers for Outdoor Colorado and the Montana Wilderness Association have been mobilizing volunteers to help work on the trail. If you would like to volunteer to work on the trail, you can get in touch with the closest U.S. Forest Service ranger office or District Bureau of Land Management field office.