A Guide to Hiking the Bright Angel Trail

by Christine Venzon
NEXT PAGE 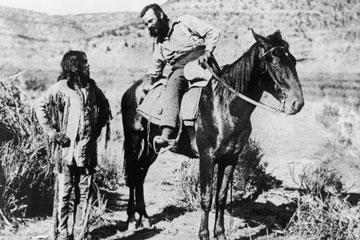 American anthropologist, geologist and explorer Major John Wesley Powell speaks with a Paiute Indian about the location of a water supply during a survey of Arizona in 1873.
Authenticated News/Getty Images

In 1869, John Wesley Powell, scientist and explorer, led nine men down the Colorado River into the Grand Canyon. The expedition did not go smoothly. The group lost two boats and was forced to eat spoiled food. Three of the men quit before the journey had even ended.

Yet for Powell, the majesty of the canyon was well worth the ordeal -- and he spared no metaphor or simile in penning its description. The walls soared like a cathedral, he wrote, in "balustrades and arches and columns with lattice work and delicate carving." In color, they rivaled a rainbow: "pink, red, brown, lavender, gray, blue and black. In some lights the saffron prevails, in other lights vermilion." Even the Colorado River, which nearly drowned them and ruined their food, he likened to a mighty instrument, "swelling in floods of music when the storm gods play upon the rocks" [source: Powell].

Along their journey, Powell was struck by one small stream's unusual clarity and he christened it Bright Angel Creek. Today, via the Bright Angel Trail, hikers can witness the same breathtaking beauty that Powell did -- without risking life and limb on the Colorado's waters. The trail begins at Grand Canyon's South Rim (elevation 6,860 feet/2,093 meters) and winds down to the banks of the Colorado River (elevation 4,380 feet/1,335 meters), offering breathtaking views of the canyon along the way.

What's now a popular avenue for hikers and backpackers in Grand Canyon National Park actually began as a fault line created by seismic activity. Over the millennia, animal herds traversing the canyon beat it into a path. And in Powell's day the Havasupai tribe used the route to access a small farm they'd developed on a plateau. At the turn of the 20th century, entrepreneurs entered the picture, improving the trail and developing campgrounds, which invited the tourist trade. The National Park Service acquired the property in 1928, added rest houses and ranger stations, and a suspension bridge now spans the river.

Despite its amenities, Bright Angel Trail is no walk in the park. While it's only four-fifths of a mile (1.3 kilometers) in linear distance, it zigzags and meanders 9.5 miles (15.3 kilometers), and heat, thirst and exhaustion still threaten those who don't plan and pack wisely. How can you prepare for this unique and lovely trail?