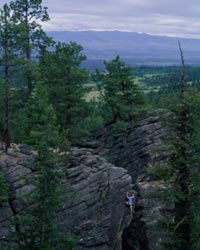 This climber makes his way up one of the challenging routes in the Bitterroot Mountains.
Heath Korvola/The Image Bank/Getty Images

Indian Hill provides some of the finest scenery around. Located in the southern reaches of the Selway-Bitterroot wilderness, it is an open hillside surrounded by pine trees and rugged, snow-capped mountain peaks. However the climb is difficult and should only be attempted by experience hikers, according to the Bitterroot National Forest supervisor's office.

Gazing out from atop Indian Hill (which is sometimes wrongly called Indian Point) gives hikers a good sense of the daunting feeling that Lewis and Clark and other early inhabitants and explorers must have had about the Bitterroot Mountains. It is massive and rugged mountains for as far as the eye can see – utterly impenetrable. Hikers today may be similarly daunted from this vantage point, despite having the benefit of a map and a clear trail.