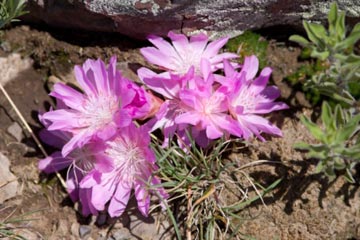 The bitterroot flower gave its name to the mountains.
iStockphoto/Thinkstock

The Magruder Trail is 101 miles (163 kilometers) of undeveloped road that twists and turns between the Selway-Bitterroot and the Frank Church-River on No Return Wilderness areas. It was created in the 1930s and remains largely unchanged to this day [source: U.S. Forest Service].

It's also known by many other names, including the Nez Perce Trail, the Elk City to Darby Road, Montana Road, and Parker Trailer.

The Magruder trail gets its name from a gruesome act of violence. In the mid 1860s, an Elk City merchant named Lloyd Magruder was murdered while traveling with four companions along the Magruder Trail near the Selway River. The killers initially fled, but were soon captured. They stood trial, were convicted, and became the victims of the first legal hanging in Idaho Territory [source: U.S. Forest Service].

This historic pass takes time to travel. Most people make it between Red River and Darby at a speed of about 12 to 15 miles (19 to 24 kilometers) per hour in six to eight hours, but that can vary based on weather conditions and vehicle types. Keep in mind that low clearance vehicles, mobile homes, and vehicles towing trailers are not recommended [source: U.S. Forest Service].

The main thing for hikers to keep in mind about the Magruder trail is that it's a forest adventure road, which means that it's narrow, steep, and winding, so it's best to tackle it in a four-wheel drive or other vehicle that can handle rough terrain. Corvettes, you've been warned.