A Guide to Hiking Bear Mountain

by Jane McGrath
NEXT PAGE 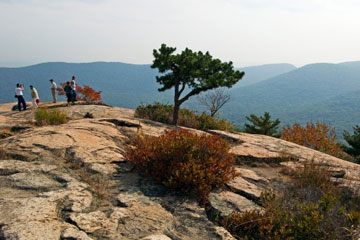 While standing among the skyscrapers in the busy streets of Manhattan, it can be hard to imagine that the tranquil and beautiful wilderness of Bear Mountain lies just 45 miles (72.4 kilometers) away. Some say that the mountain got its name because it resembles a resting bear. Some called it Bread Tray, however, because from the east it looked like a plate of bread. It also earned the nickname of "Bare Mountain" because the demands of the iron industry for charcoal resulted in cutting down many of the trees.

If it weren't for the intervention of some wealthy citizens, however, Bear Mountain would not be a state park, as it is today, but rather the site of a prison. In the early 1900s, the state planned to relocate the Sing Sing Prison there, but local residents, including E.W. Harriman, opposed the project and donated money and land for the establishment of a state park in 1910.

So what is there for a hiker to do on Bear Mountain? See the following pages for a guide to one of New York State's most popular destinations.