A Guide to Hiking the Appalachian Trail

Appalachian Trail Hiking: What to Expect on the Trails 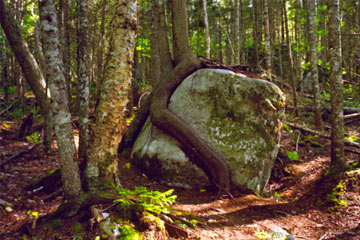 Hikers will see all types of terrain and wildlife along the Appalachian Trail, like this unusual tree growing around a boulder in Baxter State Park, Maine.
Diane Cook and Len Jenshel/Getty Images

If you hike the entire 2,180-mile (3,508-kilometer) Appalachian Trail, you'll cover a total elevation gain that would be roughly equal to climbing Mount Everest 16 times, but at a much, much gentler grade, of course. The terrain the Appalachian Trail passes through is highly varied, which is good news for thru-hikers, because hiking more than 2,000 miles (3,219 kilometers) without a change in scenery would be pretty dull. On the contrary, the Appalachian Trail actually weaves through widely diverse terrain, ranging from rocky mountaintops to flat farmland.

It should come as no surprise that the topography you encounter on the Appalachian Trail in Georgia will look a lot different from what you might find at the other end of the trail, in Maine. And because the Appalachian Trail runs through forests that feature a mix of deciduous broad-leaf trees and conifers, the trail tends to look very different from season to season.

If you're lucky, you'll also encounter plenty of wildlife as well. Depending on how much time you spend on the trail, you're likely to see rabbits, chipmunks, squirrels, frogs, lizards and a variety of birds. But there are also creatures that you won't want to get too close to, like black bears, mountain lions and moose. Bears are clever animals, and they know that thru-hikers present a moveable feast. Even though people camping along the Appalachian Trail are advised to never keep food in tents and to always hang their food overnight, several incidents in recent years have forced the U.S. Forest to temporarily close some popular stretches of the Appalachian Trail to camping [source: Gilbert].

Most thru-hikers begin their journeys in the spring, typically in March or April, at Springer Mountain, the southernmost tip of the trail in Georgia, and they reach the end terminus in Maine by September. However, that isn't the only way to do it. Other hikers choose to take the southbound route, starting in Maine in June or July and finishing up in Georgia in November or December.

Hiking from Maine to Georgia is a lot less common for a number of reasons. First, you're starting off with what's considered the most difficult leg of the trail (although there's an argument to be made that beginning with the steeper grades will whip you into shape faster). But there are other reasons that the southbound route is less popular: You could encounter muddy streams and difficult creek crossings in Maine and New Hampshire, and it will be hunting season by the time you reach some of the southern states. And if you've ever come across black flies in the summer in Maine, that's probably reason enough to skip the southbound route [source: Appalachian Trail Conservancy].

If you'd like the hike the entire trail, but don't feel like doing it straight through and all at once, there are a number of different approaches you can take. Many hikers, for example, start at the southernmost point at Springer Mountain and hike as far north as Harpers Ferry, W.Va. Then, they leave the trail and re-enter at the northernmost point, at Katahdin in Maine and hike south to Harpers Ferry. What's the point? By taking the "flip-flop" approach, you can avoid the heaviest crowds and there's a much slighter chance that you'll have to encounter snow or any extreme weather. And you can still say that you hiked the entire trail (although there's something to be said for the continuity of hiking it straight through).

As we mentioned, the most difficult stretches of the trail (by most accounts, at least) are at the northern end, in Maine and New Hampshire, and the southern end has some pretty steep patches as well. If you're a day hiker who's just interested in going for a stroll in the woods, there are access points all along the trail at state and national parks. One of the most popular and scenic places to hop on the trail is at Shenandoah National Park in Virginia, as the stretch of trail that runs near Blue Ridge Parkway and Skyline Drive is very gentle and easy.