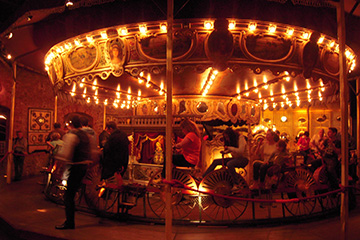 The velocipede carousel in Paris' Bercy neighborhood is one of just two left in the world.
Patrick Janicek/Flckr

One of the most beloved rides at any carnival or fair is the carousel, or merry-go-round. A menagerieof animals, often horses, is mounted on a circular platform. As the platform slowly turns around and around, each animal glides up and down a pole. A few of the animals may be stationary, for those who prefer it. The ride is safe, gentle and appeals to young and old alike. The velocipede carousel was slightly different.

Carousels trace their roots back to a game played by Arabian and Turkish horsemen in the 1100s. In the game, which Spanish crusaders brought back to Europe, men would race on horseback, lances in hand, trying to spear a tiny ring hanging from a tree limb. Fast-forward to the 18th century, when a Frenchman decided youth should be trained in ring-spearing. To help them out, he created a device where carved horses and chariots, hanging from chains, were hooked together from a center pole. From this device the modern carousel, or merry-go-round, evolved. A precise date for the first modern carousel isn't known, but they were relatively common in Europe by the late 18th century [source: International Museum of Carousel Art]. Initially carousels were powered by men or animals, then steam and finally electricity [source: Cohen].

In the late 19th century, the velocipede carousel debuted. This carousel moved by people-power: Each rider used bicycle-type pedals to collectively move the ride. As people pedaled in unison, the entire set of figures circled the platform. The pedals were set so that you had to pedal together, at the same speed, like riding a tandem bike. If you couldn't keep up, you could lift your feet up off the pedals and enjoy a ride compliments of your neighbors' sweat. Because a lot of young kids wouldn't be able to help pedal, velocipede carousels contained some raised, pedal-less seats.Some velocipede carousels were also built so they could be pedaled backward [source: Cohen].

Unfortunately, velocipede carousels were a short-lived phenomenon likely because people preferred the ease of mechanical power over their own muscle. By the early 20th century, they were largely gone.More interesting than their short longevity may be the impetus behind their creation. 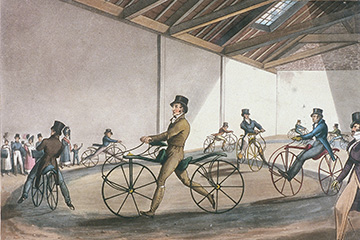 Just two velocipede carousels remain in the world today. One is in France, while the other is part of a traveling collection of vintage amusement park rides. The velocipede carousel in France resides at the Musée des Arts Forains (Museum of Fairground Arts) in Paris' Bercy neighborhood. The museum, opened in 1996, comprises a colorful jumble ofcarousels, carnival rides and games from the 1850 to 1930 time period. The beautifully restored pieces were collected by a man named Jean-Paul Favand; his collection is one of the largest such private collections in Europe. Luckily for the rest of us, Favand turned his collection into a museum so everyone could enjoy it. Even better, the rides in his collection aren't simply on display, they're still operative. So yes, if you head to the museum, you can pedal his 1885 velocipede carousel [sources: Thomas, Robertson]. Two interesting points about his velocipede carousel: while French carousels all run counterclockwise, this one runs clockwise because it was operated in Great Britain, where that direction was the norm.This velocipede carousel was also featured in the 2011 film "Midnight in Paris," directed by Woody Allen[source: Rohan].

The world's other remaining velocipede carousel is part of Fête Paradiso, a similar group ofvintage rides, carousels and various other carnival components. Frenchmen Francis Staub and Régis Masclet, rabid collectors of old carnival rides and art, purchased the pieces and came up with the idea of traveling around the world with them, reminiscent of the carnivals of yesteryear. Fête Paradiso was set up for several weeks at a time in various locales, beginning in 2013 [source: Rohan].

The copper-and-iron velocipede carousel in the Fête Paradiso collection was created in 1897 and used in the 1889 World's Fair in Paris, where the Eiffel Tower was also unveiled [sources: The Library of Congress, The New York Nineteenth Century Society]. Nikola Tesla, a famous inventor known for his contributions to alternating current electricity, is said to have provided the engines for this particular velocipede carousel,which can move both forward and backward[source: Cohen]. At some point over the years, an electrical engine was added to the carousel, negating the need for feet to power it along. Today, however, that's the point of riding on it. Luckily, the engine can simply be turned off to allow it to once again be operated by people [source: Rohan].

In 2015, Fête Paradiso reportedly closed permanently, according to their Facebook page. The fate of its velocipede carousel is unknown.

Velocipede carousels may be passé, even in France where they originated, but that doesn't mean the French have eschewed all carousels. Paris today is home to many interesting and unusual merry-go-rounds. Jardin des Plantes is a 1930s-style carousel that features an intriguing twist: Its creatures are all extinct or nearly extinct — dodos, Tasmanian devils and the like. Jardin du Luxembourg isthe oldest carousel in Paris (it first began twirling around in 1879), and the animals on its platform were drawn by architect Charles Garnier, who designed Paris' Opera House. In addition, kids (or adults) who sit in the saddle of a horse on the outer circle are given a stick. During the ride, they use it to try and snag as many tin rings as they can; the rings hang from a wooden shank off to the side [source: Court]. 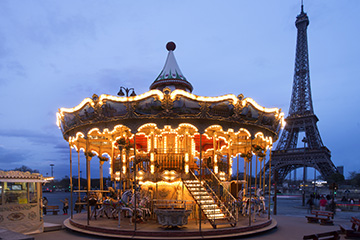