The Many Haunted Mansions of Disney Theme Parks

Browse the article The Many Haunted Mansions of Disney Theme Parks 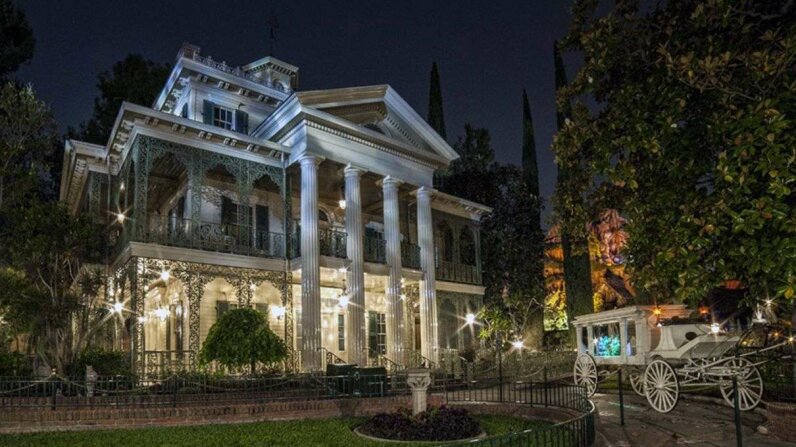 This photo of the Haunted Mansion at Disneyland was snapped in 2014. Wikimedia Commons

It's said that Disneyland is the happiest place on Earth, but hiding deep inside each Disney theme park is a mansion. At some parks, the mansion is haunted; at others, the mansion is packed with phantoms and at still others, it's full of mysticism and mystery.

All of those mansions originated from Disneyland's Haunted Mansion, so why are there so many different versions of this iconic ride?

Scott Renshaw, author of "Happy Place: Living the Disney Parks Life," described by email his first experience with the Disneyland Haunted Mansion as a kid: "There was always this slight hesitation, because the graveyard was always a little bit scary to me, but I'd come out of it feeling like I'd beaten a fear."

That's really the way the ride works today. The first half of the ride aims for scary, but transitions into more of a ghostly party. This two-part feel had a lot to do with the competing ideas from the Disney Imagineers behind the ride, but it arguably came together into something magical. (You can hear more about the creation of the initial ride in the classic two-part episode from Stuff You Missed in History Class.)

When Disney decided to transplant the ride to the Florida park, the company had the opportunity to change the exterior and add things on the inside. Located in the Magic Kingdom's Liberty Square, it began operation in 1971. Since Orlando had none of the space constraints of Anaheim, Imagineers designed a much larger and more luxurious mansion.

Since there are more international travelers to Walt Disney World who might only get one chance of going to the park in their lifetime, the Florida Haunted Mansion remains in its original form throughout the year. In California, however, the attraction turns into a "The Nightmare Before Christmas" ride through the holiday seasons.

Although the Haunted Mansion at Disneyland in Tokyo is essentially the same as it appears in Florida, you'll find this attraction in Fantasyland. Why there? In Japanese culture, ghosts are often found in fairy tales as opposed to spooky stories.

As with Anaheim, the Tokyo Haunted Mansion undergoes the seasonal "The Nightmare Before Christmas" transformation. The attraction opened in 1983.

For Disneyland Paris, Imagineers decided a darker tone was needed for the ride. Since the ride would appear in Frontierland's Thunder Mesa, it would need to take on a spooky Wild West flair. Accordingly, the French ride tells the story of a young girl named Melanie Ravenswood, the daughter of the man who built Thunder Mesa. Her fiance commits suicide, and the bride is disconsolate. The ballroom scene from the original ride is replaced by a wedding party. And instead of the lighthearted rendition of a grim-grinning ghost, an angel of death "kills" you and you descend into a graveyard where the ghosts of Thunder Mesa's rowdy past have come to life.

The whole ride, which opened in 1992, is a comment on the cultural past of America for Europeans and other Disneyland Paris visitors to experience.

The most radical departure in the Haunted Mansion offerings around the world comes in the form of Mystic Manor. This attraction is the Chinese version of the ride at Disneyland Hong Kong and Shanghai in Mystic Point, which is a land dedicated to mystery and the supernatural.

Cultural views of the afterlife in China are much different than in the West, so Mystic Manor contains no spirits or ghosts whatsoever, though the ride does have veiled references to its American and European counterparts. Instead, it's a whimsical fantasy adventure that follows the British Lord Henry Mystic and his monkey Albert as the objects in his collection come to life in astonishing ways. It even features music from Danny Elfman.

No matter where you go in the world, there is going to be a spooky experience waiting for you, one that's culturally appropriate for wherever you're at.

Can't get enough of Disney's different Haunted Mansions? Listen to the Stuff You Missed in History Class podcasts embedded here, or try them out on your favorite podcasting service, to get all the Disney details.

NOW THAT'S COOL
Vincent Price originally recorded the ride narration for the opening of Phantom Manor at Disneyland Paris. It has since been replaced. Fans are still eager to get their hands on a copy of the audio.