What makes a roller coaster a 'mega coaster'? 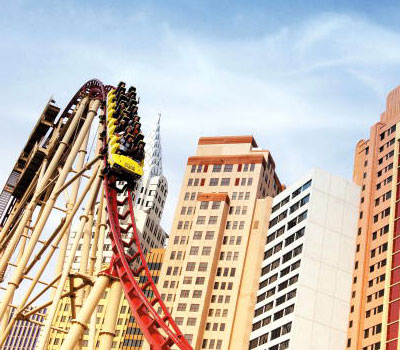 You check your lap­ restraint a minimum of seven times before the ride attend­ant sends the cars inching up the towering incline. With each chink-chink-chink up the first 200-foot (61-meter) hill, the knot in your stomach grows tighter. As y­ou round the top, you fleetingly glimpse the miniature landscape below before barreling toward the ground at 84 miles (135 kilometers) per hour. Stomach in throat, you scream and raise your hands in the air with your fellow adrenaline junkies.

Five minutes later, you line up to do it all over again.

There's a reason people are willing to wait hours in the hot sun for just a few minutes on this hunk of steel. This is a mega coaster, a really high, straight up-and-down coaster that combines extreme height and speed with sharp, almost vertical drops to give riders more of what they crave: airtime. That's roller coaster lingo for that butterflies in your stomach feeling. Few things in life are as thrilling as the breathtaking rise and fall of a roller coaster, and the mega coaster is arguably among the most thrilling of them all.

Although roller coasters have come a long way in the last 30 years, the underlying principles of John Allen's Racer are still in use. Intamin, a Swiss-based roller coaster designer, coined the term "mega coaster," and describes them as follows:

Their launching system, which was originally designed to launch rockets, can propel them from 0 to 70 miles (113 kilometers) per hour in just 4 seconds [source: Farlex].

If a mega coaster makes you yawn, you might want to kick it up a notch, thrill seeker, and read about the baddest extreme coaster of them all on the following page. 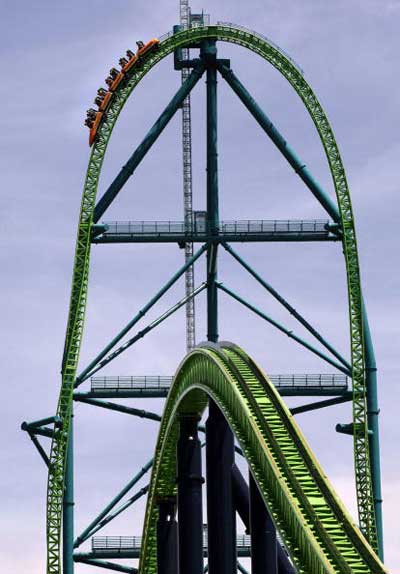 If a drop from 200-plus feet at speeds exceeding 84 miles (135 kilometers) per hour doesn't make you ridiculously nervous, perhaps you'd like to raise the bar. The Kingda Ka roller coaster at Six Flags Great Adventure in New Jersey might be more your style.

This giga coaster -- a super-high coaster characterized by heights above 302 feet (92 meters) and speeds above 93 miles (150 kilometers) per hour -- is both the tallest and fastest steel coaster in the world, and it also has the highest drop [Intamin]. The ride may only last 50 seconds, but those seconds are pretty intense [source: Ultimate].

Another giga coaster, Millennium Force, broke 10 world records when it was introduced in the year 2000. Although it no longer holds the records for tallest and fastest full-circuit coaster, polls still consistently rank it as one of the top steel roller coasters in the world.

Located at Cedar Point in Ohio, Millennium Force starts out by climbing a 310-foot (94-meter) hill right next to Lake Erie. The 6,595-foot (2,010-meter) long coaster includes several hills approaching 200 feet (61 meters), two dark tunnels, three overbanked turns and an impressive 300-foot (91-meter) drop at a near vertical 80 degrees. The coaster has a top speed of 92 miles (150 kilometers) per hour and so far has provided 2 minutes and 20 seconds worth of excitement to more than 12 million riders [source: Ultimate, Cedar Fair].

Both Kingda Ka and Millennium Force were built by Intamin, the same company responsible for popularizing the term mega coaster. Intamin also makes a mega-lite coaster, which is like a miniature version of the mega coasters with a first drop of 98 feet (30 meters) at 56 miles (90 kilometers) per hour [source: Intamin]. Mega-lites, with their many high-speed turns at or near ground level, followed by twisting up and downs and ending with a series of hills affectionately called "camel backs" and "bunny hops," are not as high or as fast as the megas and gigas, but they still have their share of thrills.

Wherever you may live, you're bound to have a mega or giga coaster near you. These towering instruments of entertainment (or torture, depending on your point of view) can be found anywhere from Jackson, N.J., to Germany and Japan.

For more interesting facts about these daredevil rides, explore the links on the next page. ­