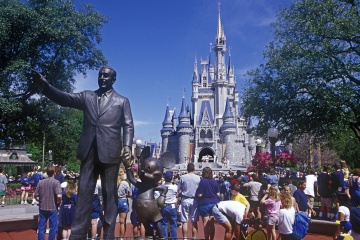 Disney World has been a staple in American culture for nearly a century, but is it really the wonderland we've always been told it is.
John Greim/LightRocket

When you think about Disney World, you probably imagine Mickey Mouse, Disney princesses and wholesome mouse-eared families posing for pictures in front of Cinderella's castle. The Disney image is a tremendously influential one worldwide and the vast Disney corporation works very hard to keep its reputation as cheerful and family-friendly as possible. But with this cultural influence comes urban legends, many of which have persisted for decades.

The Disney urban legends range from the fairly innocent (elaborate theories about hidden messages in animated movies) to the totally odd (Walt Disney was cryogenically frozen after his death). Many of them, however, are decidedly more sinister, suggesting that this enormous company has a pretty dark underbelly. Walt Disney, for example, is said to have blacklisted Adriana Caselotti, the actress who voiced Snow White, because he thought the animated princess's image would be tarnished if she ever played another role. Disney is also said to have had a serious interest in mind control. And there's even a story about a covered-up child suicide on the "It's a Small World" ride in 1999.

The "no one dies at Disney" theory ties into the Small World rumor. It claims that, in order to keep up the "happiest place on Earth" image, the Disney parks have an unwritten policy to never allow anyone to die on the premises. Disney employees, the rumor goes, take great pains to conceal deaths from the public, sometimes covertly cleaning up the scene of an accident and alerting park security before paramedics. Even though there are published reports of people who have met their demise at Disney World, EPCOT and Disneyland, the legend holds that none of them have actually been declared dead on the property. Paramedics, allegedly, have been instructed to delay the official pronouncement until the person is in a hospital.

This doesn't seem to make sense at first glance. There are plenty of published reports about deaths at Disney parks. The first was Deborah Stone, an 18-year-old Disneyland cast member, who was crushed by a malfunctioning stage in 1974. A small plane crash in the EPCOT parking lot killed two people in 1984. A man died when the Big Thunder Mountain ride at Disneyland derailed in 2003. The list goes on and the numbers aren't all that surprising, considering the thousands of Disney employees and the fact that more than 132 million people visited its parks in 2013 alone [source: TEA]. While it's possible that a major conspiracy ensured that none of the victims were actually pronounced dead at the park, there are enough examples to make it seem extremely farfetched. Disney, of course, denies these claims, but still they persist