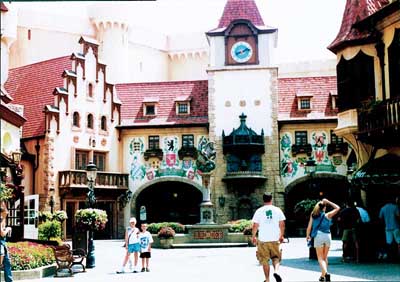 Most families plan at least one trip during their lifetime to the biggest Disney complex in the world: Disney World in Orlando. Four major theme parks make up Disney World, and more than a dozen other attractions and two evening entertainment districts are also deserving of a visit.

The Magic Kingdom, with its Cinderella Castle centerpiece and costumed characters including Mickey, Minnie, Donald, and other Disney favorites, is the best known and possibly best loved of all the Disney World parks. Parents can take their children on the rides they enjoyed as children, such as the Mad Tea Party, Space Mountain, and the Jungle Cruise, as well as The Haunted Mansion and Magic Carpets of Aladdin.

At Disney's MGM Studios, guests can tour the MGM back lot and see sets from favorite TV shows or visit the animation studios to observe the artists who work on Disney's animated features. Adrenaline junkies can hop onto the Rock 'n' Roller Coaster and thrill to its high-speed loops and drops, or free-fall 13 stories on the Twilight Zone Tower of Terror ride. There are a number of excellent live stage shows featuring Disney characters, including the family favorite Beauty and the Beast.

Part zoo, part theme park, Disney's Animal Kingdom is a blend of nature and adventure packaged with all of the imaginative touches and attention to detail for which Disney is known. Like Magic Kingdom, Animal Kingdom has different themed lands, each representing the seven continents.

In this park you'll find more than 1,000 creatures from all corners of the world living in re-created habitats. Guests with small children will find the safari-themed tour buses very useful for seeing as much of the park as possible. Be sure to catch the Festival of the Lion King show, one of the very best in any of the Disney parks. The park also features a number of rides.

Epcot Center showcases world culture and technology in a unique mix of attractions and educational exhibits. It consists of two areas, World Showcase and Future World. Eleven countries are celebrated in the festive World Showcase; each country offers performances, traditional food, craft shops, and exhibits that spotlight its culture. Future World has cutting-edge interactive exhibits and rides that take you to the outer limits of the human imagination.