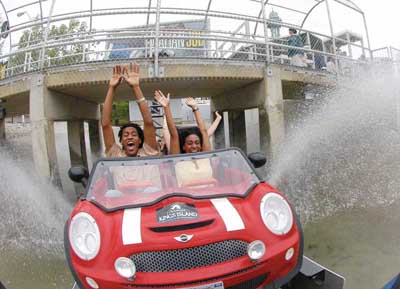 Courtesy of Paramount's Kings Island Driving a Mini-Cooper has never been so much fun. The Italian Job Stunt Track at Kings Island takes you on a wild joyride.

Kings Island is a 364-acre amusement and water park with a number of rides based on Paramount films, as well as seven themed areas, two of which are designed for visitors of all ages. Located near Cincinnati, it boasts 80 world-class thrill rides, live entertainment stage shows, and attractions. Boomerang Bay, a huge Australian-themed water park, has 30 slides for kids of all ages.

Areas for younger kids include both Nickelodeon Universe and Hanna-Barbera lands with a variety of Dora the Explorer and SpongeBob SquarePants-themed attractions, as well as the Rugrats Runaway Reptar, the world's first suspended roller coaster designed for younger children.

Older children will like The Beast, a legendary ride that's been called the best wooden roller coaster in the world by ride aficionados. On a roller coaster ride based on The Italian Job, guests board their own Mini-Cooper cars and peel off on a thrilling excursion based on sequences in the movie.