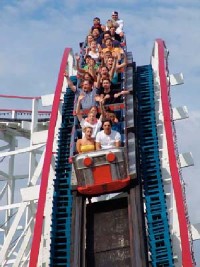 Founded in 1898, Kennywood is the quintessential American amusement park. It represents a piece of American history as well, and is a National Historic Landmark. Located in West Mifflin along Pennsylvania's Monongahela River, Kennywood Amusement Park revisits the best of an old-style park while featuring the thrills of the new.

Its classic wooden roller coasters are considered to be among the best in the world. The Racer is a particular favorite for kids. It is a single-track racing coaster, the only one of its kind in the United States, and the ride's racing aspect appeals to anyone's competitive spirit. The park's Kiddieland was built in 1927, and a few of its original rides are still there.

Winding paths edged with colorful flowers and luxuriant bushes lead visitors to the various rides. Towering trees, many there since the park opened, provide plenty of shade from the summer heat. Kennywood is also famous for its homemade fudge, funnel cakes, dip cones, and "Potato Patch French fries" that are cut fresh and served in a basket with up to eight toppings.