12 of the World's Greatest Roller Coasters

Browse the article 12 of the World's Greatest Roller Coasters 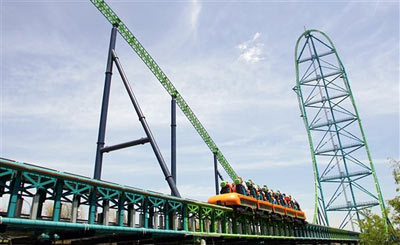 The Kingda Ka is one of the world's tallest and fastest roller coasters.
© Tim Larsen/Associated Press

In the 1880s on Coney Island -- a spit of Brooklyn beachfront -- the first American roller coasters were born … with some serious defects. One of the pioneer coasters, the Flip-Flap Railway, had the unfortunate problem of snapping riders' necks due to the extreme g-forces experienced when accelerating through the coaster's circular loop. This was obviously not ideal, and roller coasters had a ways to go before they became simultaneously safe and scream-inducing.

Thanks to engineering innovations and steel construction, coasters are now harmless and at speeds you can't fathom. Some of today's fastest coasters reach more than 100 miles per hour (160 kilometers per hour) -- much faster than you'd dare drive your car. And their drops feel more like prolonged freefalls -- one of the coasters on our list rockets down an 825-foot (251-meter) hill. Designers have infused creativity into their projects. One coaster blends music into the experience and another enables its passengers to "fly." But how? Let's take a look at today's greatest thrill rides.

Top Thrill Dragster also located at Cedar Point in Ohio, is labeled an "accelerator coaster" with trains shaped like rip-roaring dragsters. But the ride feels more like a jaw-tightening space launch. Reaching a speed of 120 miles per hour in just four seconds, passengers are thrust to the top of a 420-foot peak before plunging straight down 400 feet, while at the same time twisting and turning through 270-degree spirals.

The Raptor is a steel inverted coaster at Cedar Point, America's roller coaster capital, in Sandusky, Ohio. When it opened in 1994, this sweet ride was the largest of its type ever built. Passengers soar up 137 feet before gliding down 119 feet. Reaching a maximum speed of 57 miles per hour, there are six inversions, including a cobra roll and two corkscrews that are great for shaking up the digestive system. Rides last an enjoyable 2 minutes, 16 seconds -- an adventure enjoyed by nearly two million thrill seekers every year.

If you've ever wanted to fly like a superhero, this is the ride for you! Located at Six Flags theme parks in Illinois, New Jersey, and Georgia, this ride's specially-designed cars tilt passengers facedown into a flying position, so that they're suspended horizontally from the track above. Riders get a bird's-eye view at the top of a 109-foot hill, before sailing through the air at 60 miles per hour in a series of loops, spirals, turns, and rolls. And with the first-of-its-kind pretzel-shaped loop, this truly is a unique thrill ride.

Opened in 1989 at Cedar Point in Sandusky, Ohio, Magnum XL-200 is a steel roller coaster that was the first constructed circuit roller coaster to break the 200-foot barrier, with its 205-foot peak and 194.67-foot drop. The view of Lake Erie from the pinnacle is breathtaking, with plenty of opportunity to see the countryside along the nearly mile-long track. That is, if passengers can keep their eyes open while speeding along at 72 miles per hour. Expert riders prefer the third row of seats in the first car because of numerous, intense airtime moments.

Located at Islands of Adventure in Orlando, Florida, Dueling Dragons is the world's first high-speed, dueling inverted roller coaster; inverted means that the cars travel under the track rather than on top of it. Dueling Dragons is actually two roller coasters, one representing fire and the other ice. Each has several throat-gulping inversions, including corkscrews, vertical loops, and a cobra roll. Top speed is 55 miles per hour with a maximum height of 125 feet. Riders on each track zoom within inches of each other in three near-miss experiences that elicit plenty of screaming.

Located at Disney parks in Florida and France, the Rock 'n' Roller Coaster is an indoor experience, called a "dark ride." Accelerating to 57 miles per hour in 2.8 seconds, windblown hair is guaranteed. But the highlight of this coaster is that rides are accompanied by music by Aerosmith, including songs such as "Back in the Saddle," "Sweet Emotion," and "Love in an Elevator."

Son of Beast, built in 2000 at Paramount's Kings Island in Cincinnati, Ohio, is touted as the world's tallest and fastest wooden coaster, with a 218-foot apex and speeds up to 78 miles per hour. At the time of its construction, Son of Beast was also the world's only looping wooden roller coaster, although in 2007, the loop was removed. Son of Beast's daddy, The Beast, was constructed at King's Island in 1979 and holds the title as the longest wooden roller coaster, at 7,400 feet.

When it first opened in 2001 at Fuji-Q Highland in Japan, Dodonpa was the world's fastest steel coaster, but by 2006, it had slipped to third place. However, it retains the title for the fastest acceleration in the world, reaching a top speed of 106.8 miles per hour in a mere 1.8 seconds! At speeds like that, ride time is only 55 seconds, but that seems like an eternity when rushing down 170 feet at a 90-degree angle.

Steel Dragon 2000, located at Nagashima Spa Land Amusement Park in Japan, represents "The Year of the Dragon." As of 2006, it had the longest track of any coaster in the world, hurtling its riders along at speeds up to 95 miles per hour for 8,133.17 feet. With a peak at 318.25 feet, it is also the world's tallest coaster to use a chain lift: Two chains are utilized, one for the bottom half and one for the top half because a single chain would be too long and heavy. For earthquake protection, more steel was used in this $50 million machine than in any other coaster in the world.

Opened in 1999, Apollo's Chariot is an award-winning steel coaster at Busch Gardens in Williamsburg, Virginia. Holding the world record for a gulping 825 feet of drops on a coaster, Apollo's Chariot starts with a 170-foot lift hill, then hits a maximum speed of 73 miles per hour. At the peak, riders drop down a few teasing feet before the cars swoop down 210 feet to graze a water-filled gully at a 65 degree angle. Riders then soar up a second hill and back down a 131-foot drop. Then, the coaster screams through a short tunnel and then takes off up a third incline, before screeching around a curved 144-foot plunge. Riders slow down with a series of bunny bumps before the train brakes and returns safely to the station.

Kingda Ka, at Six Flags Great Adventure in Jackson, New Jersey, is the ultimate ride on several fronts. As of 2007, it was the tallest and fastest roller coaster on the planet. Reaching 128 miles per hour in 3.5 seconds, the train rockets straight up to the 456-foot apex. Crossing over the pinnacle, the train plummets straight down into a vertical, hair-raising descent through a spiral twist at speeds of more than 100 miles per hour. Riders then face a 129-foot tall hill that bounces them out of their seats for a few seconds.

While not necessarily the tallest, fastest, or scariest ride in the world, the Matterhorn deserves a nod as the grandfather of modern coasters. Still thrilling riders at Disneyland, this ride was the world's first major steel coaster when it opened in 1959. Inspired by the Matterhorn, a 14,692-foot mountain in the Swiss Alps, the structure is made up of two linking steel roller coasters with loops and corkscrews. Top speed is 18 miles per hour. 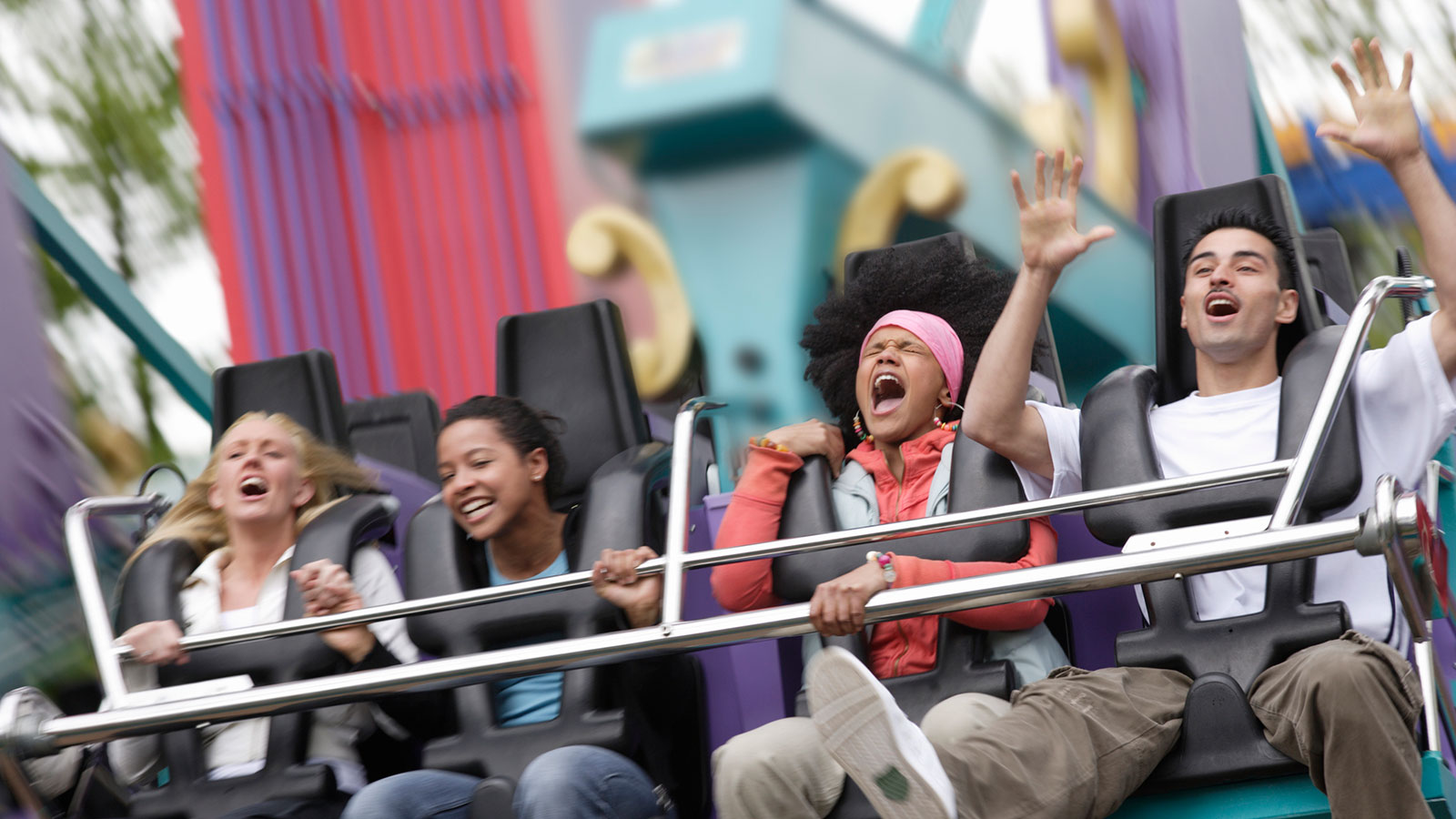