by Jessika Toothman
Prev NEXT
3

There's a lot to appeal to vacationers planning a family trip in the Atlanta area, both in the city itself and in the surrounding metro area. The Georgia Aquarium, one of the largest in the world, is right next door to other family favorites, such as the World of Coca-Cola, the Children's Museum of Atlanta and Centennial Olympic Park - the site of the 1988 U.S. Olympics. The nearby CNN Center offers studio tours where young, aspiring newscasters might be interested to see how the TV network assembles its news and puts it on the air.

For tourists looking for a challenging hike, the 1.3 mile trek up Stone Mountain elevates visitors for a panoramic view of the city. If anyone in the family isn't in the mood for such a vertical trek, there's also the Summit Skyride that shuttles guests to and from the peak. The park features other attractions, too, such as a nightly laser light show and other children's activities.

Culture vultures will want to hit the High Museum of Art, and if animals are what you're after, Zoo Atlanta features one of the few panda bear exhibits in the nation. History buffs might opt for a trip to the Martin Luther King, Jr. National Historic Site or the Fernbank Museum of Natural History. The city is also home to the Atlanta Botanical Garden, which is adjacent to Piedmont Park (a great place for a picnic lunch!). The amusement parks Six Flags Over Georgia and Six Flags White Water are located quite close to Atlanta as well. 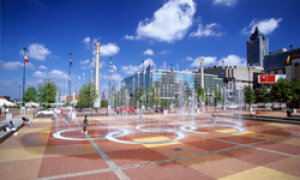