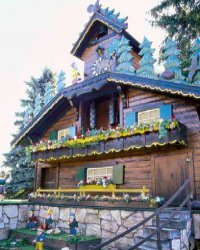 The World's Largest Cuckoo Clock has been battling with the Bavarian Clock Haus in Frankenmuth, Michigan, for the largest title. Find out more here.

One of many tourist magnets at the Swiss-themed Alpine Homestead Restaurant, this intricate 23.5-foot-tall cuckoo clock was constructed in 1972 and has been in heated competition with the Bavarian Clock Haus in Frankenmuth, Mich., for the title of the world's largest. The clock was formerly located in Wilmot, Ohio, and its supporters argue that a house can't truly be considered a clock. In 2010 it was moved to its current location in Sugarcreek, also known as "The Little Switzerland of Ohio."