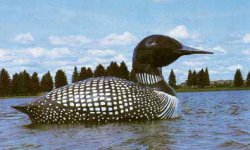 The 21-foot-long World's Largest Floating Loon is tethered in the middle of Virginia, Minnesota's Silver Lake. Learn all about it at HowStuffWorks.

In the warmer months, in the middle of Silver Lake in Virginia, Minn., you're bound to catch a glimpse of a floating loon named Ginny. But Ginny isn't like any loon you've ever seen. She's a 21-foot-long monument built by the "Land of the Loon" festival committee. They built her from fiberglass over a metal frame in 1982, just a few years after a smaller version was vandalized. You don't need to worry about this loon coming ashore, though -- it's tethered to the bottom of the lake by a steel cable.