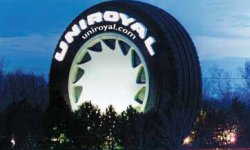 When it comes to roadside attractions, bigger is better. If you've managed to actually construct a large roadside attraction, your work has only begun. Maintaining the world's largest of anything is an ongoing job that requires, at the very least, a good deal of paint -- especially in harsh climates. Promotion is another necessity; you need to communicate to the car-bound masses that the world's largest hockey stick or pencil sharpener or rubber band ball exists and let them know where they can find it.

You might call the Guinness Book of World Record folks to alert them to your new record-setting creation, although they're notoriously finicky about adding categories that are too obscure. But you don't need their blessing. You know you have the world's largest...whatever it might be. To see some of what you're up against, check out the best of the world's largest in the following pages.