What was the first road trip? 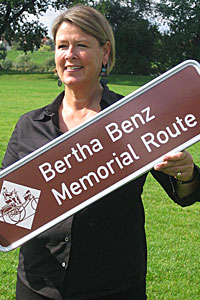 The invention of the automobile not only revolutionized transportation; on a personal level, it empowered individuals and families with independence and mobility. Many people's fondest childhood memories are of family road trips, with their promise of new sights and experiences. Indeed, the excitement of a road trip often has as much to do with the journey as the destination.

We've looked back through history to find out how long this tradition has been around, and it might surprise some to learn that the first road trip was actually undertaken by a woman. It's notable because society has always perceived the automobile as a particularly masculine machine. After all, it was invented by men, and the world of auto mechanics and car enthusiasts has always been male-dominated. Even the old stereotype says that women make poor drivers. But it's not a stretch to say that the automobile might not have caught on so quickly had it not been for the encouragement and know-how of one adventurous woman and her voyage on the first-ever road trip.

Bertha Benz was the wife of German engineer Karl Benz, the man usually credited as the inventor of the automobile (along with Gottlieb Daimler, who was working on his own invention independently of Benz). Benz built a gasoline engine in 1878, and after a few years, he was able to combine this engine with a specially-designed, three-wheeled carriage. This is what many consider the first automobile. It had two large wheels in back and a smaller single wheel in front for steering. Instead of a steering wheel, the Benz Patent-Motorwagen used a lever to steer, as well as levers to control the brakes and gearshift. But it was a very primitive machine, with only a 3/4-horsepower, one-cylinder, four-stroke internal combustion engine that maxed out at just 10 miles per hour (16.1 kilometers per hour). It was fairly difficult to control, and Karl Benz himself crashed it into a wall during one early test. When he felt confident enough to ride it around the streets, it only worked for a short time before the drive chain snapped.

Understandably, Karl Benz was skeptical about the marketability of his three-wheeled "motorwagen" until he could work out all of the kinks. That's when his wife Bertha took the wheel.

To Grandmother's House We Go

To prove to the public -- and to her husband -- that the invention of the automobile was truly a marvel, Bertha decided to take the motorwagen out for a drive. But she didn't just want to take it around the neighborhood. She wanted to visit her mother in Pforzheim, a town about 60 miles (96.6 kilometers) from where she lived in Mannheim. Because, in her words, "Karl would never have allowed that," she didn't ask his permission. Instead, she planned the daring road trip without his knowledge and left early one August morning in 1888, before Karl woke up. She also took along their sons, Eugen, 15, and Richard, 14.

Of course, given that gas stations didn't exist at the time, dirt roads were rough and horse-trodden, and Benz's automobile was finicky and unreliable, this was no easy road trip. But Bertha was resourceful and determined to overcome every obstacle. To fill up, she was able to stop at a pharmacy and purchase ligroin (petroleum ether), a type of detergent that could also serve as fuel.

Benz's three-wheeled design wasn't ideal for the dirt roads, either. Although the carriage-worn roads had two ruts for the machine's back wheels, there was no rut for the center front wheel. Instead, there were horse tracks, which must have made for a bumpy ride. (Benz would later give in and manufacture four-wheeled automobiles to compete with his rival, Daimler.)

Other problems befell the three motorists. They found the motorwagen couldn't make it up hills without needing a push. Bertha reported this to Karl, who later added better gears. She also used her feminine accessories -- employing her hairpin to fix a clog in the fuel line and her garter to insulate the electric ignition cable when it broke. She made it to Pforzheim by nightfall and wired her husband that they had arrived. But the way back wasn't easy either. The wooden brake shoes had worn down, so much so that when they got to Bauschlott, she asked a shoemaker to nail leather strips on them -- the first brake pads.

Her husband later praised her, saying, "She was much more courageous than me, and went on a decisive trip for the further development of the motor carriage."

Today, tourists can follow the figure-eight route that Bertha took, which also makes for a good sightseeing tour through picturesque German towns, vineyards and meadows.