What was the first cross-country U.S. road trip? 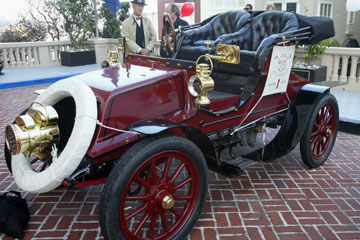 A 1903 Winton on display at a send-off ceremony for a group of motorists who, in 2003, recreated the first car trip across the U.S. See more pictures of classic cars.
Justin Sullivan/Getty Images

It's hard to imagine how anyone ever laughed off the automobile as a passing fad. But at the beginning of the 20th century, many people did. According to the George Gershwin lyrics, "Ford and his Lizzie kept the laughers busy." Gershwin was referring to Henry Ford and his Model-T car, which was introduced in 1908 and nicknamed the "Tin Lizzie." Few people at the time suspected the automobile could overtake the horse as the most practical method of travel.

However, it gets easier to understand people's skepticism (and mocking amusement), when you see just how primitive and unreliable these early automobiles were. In the 1890s, one was lucky to drive a few miles without some sort of breakdown. Motorists needed to double as mechanics to constantly maintain the engines. It's no wonder that a group of gentlemen, while gathered at San Francisco's University Club on May 19, 1903, were arguing that the automobile would fade away because it wasn't useful for long distances.

As it happened, a 31-year-old Vermont physician by the name of Horatio Nelson Jackson was passing through San Francisco, and he was there that night participating in the conversation. He disagreed with the other men, arguing that the automobile had a great future. And what's more, he maintained that he could successfully drive one across the country -- a feat that few had attempted and none had yet accomplished. He even bet $50 that he could do it in less than 90 days.

After securing his wife's blessing and funds, Jackson quickly purchased a red 1903 Winton touring car that he nicknamed "The Vermont." The car had a 2-cylinder, 20-horsepower engine and no amenities to speak of -- not even a top or a windshield. He also recruited Sewall K. Crocker, a 22-year-old mechanic, to join him on his journey. He loaded up equipment, including guns, cooking gear, a Kodak camera, jacks, and a spade and fireman's axe, as well as a block and tackle with 150 feet (45.7 meters) of rope.

After just four days of planning, Jackson started his journey. Little did he know, however, that the Packard Motor Car Company was already months into planning its own automobile voyage across the country. Compared to Packard's meticulous planning, Jackson was flying by the seat of his pants. But what he lacked in wisdom, he made up for in sheer determination.

Thanks to the many letters Jackson wrote to his wife, we have a detailed account of his journey.

Jackson Drives Across the United States

Jackson's journey from San Francisco to New York City was by no means certain. He faced dirt roads, mountains, mud, breakdowns and mishaps along the way. Two years earlier, the automobile developer Alexander Winton had also attempted to drive across the country, but his car got stuck hopelessly in the sands of Nevada. Jackson learned from Winton's mistake, though, and decided to avoid Nevada completely, driving north to Oregon instead of following a more direct route. Otherwise, when he could, he stayed on roads near railroad tracks, sometimes crossing railroad bridges when there was no clear path.

There was a time before gas stations existed, so Jackson had to buy fuel from general stores that carried it for farm equipment.His Winton car only held about 12 gallons (45.4 liters) of fuel, so he packed extra. Without headlights, he affixed an acetylene lamp to the front of the car. And without reliable road signs, he had to trust local advice and made several wrong turns along the way. Boulders often blocked the road, and occasionally the car would get stuck in deep streams or mud, requiring Jackson and Crocker to pull it out with the block and tackle. Jackson lost several personal items along the bumpy roads, too, including cooking gear and two pairs of spectacles. More than once, he was held up for several days in towns waiting for shipments of replacement parts for the car.

On June 20, about a month into Jackson's journey, two men commissioned by the Packard Motor Company left San Francisco for a cross-country automobile publicity stunt. Unlike Jackson and Crocker, the company planned every step of the trip and sent along an expert machinist. Furthermore, another cross-country team driving an Oldsmobile set out on July 6. Jackson soon learned of the rival trips and was determined to finish before them. Indeed, had the Packard team not made a detour planned for publicity purposes, they would have beat Jackson to the New York City finish line. Eventually, the Winton Motor Carriage Company, which manufactured Jackson's car, learned of his expedition and offered to fund the remainder of the trip, but Jackson refused.

He made it to New York City in 63 days, beating all competitors. His route brought him from California through Oregon, Idaho, Wyoming, Nebraska, Iowa, Illinois, Indiana, Ohio, Pennsylvania and finally New York. His $50 bet ended up costing him $8,000 -- and according to his granddaughters, he never bothered to collect his winnings.

For more companionship, Jackson also purchased a bulldog named Bud along the way for $15. He even got driving goggles for the dog so dirt wouldn't get in his eyes.