How should you decide between flying and taking a road trip? 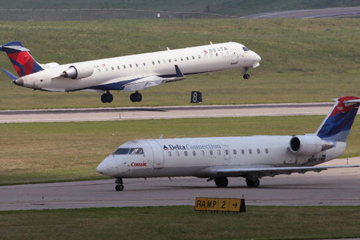 A Delta jet lands as another prepares for takeoff at the Cincinnati/Northern Kentucky International Airport near Covington, Ky. See more pictures of the history of flight.
Scott Olson/Getty Images

Have you ever faced this common traveling dilemma: You have to get out of town -- way out of town -- for a vacation, or perhaps for a professional conference. But before you even start to think about packing that first bag, you must decide, "Should I fly or should I drive?"

The conundrum only gets more complicated if you take your trip during the summer vacation season, when fuel prices traditionally spike.

This article will offer advice to help you save time, money, and your precious sanity when it comes to taking that next long-distance trip. While it's great to save money, you should be sure to consider all the factors that might weigh on the quality of your trip.

Weighing all the costs

Making the smartest choice between driving and flying requires that you juggle multiple factors and figure out how important each is to you: overall monetary cost; time spent traveling versus being at your destination; how much will either mode of transit aggravate you in the case of delays or unpleasant conditions (i.e., security pat-downs and obnoxious passengers versus highway traffic jams, bad weather or inept motorists). And let's not forget the cost that is not immediately visible, but that many people consider of ultimate importance to the planet: the environmental footprint you leave in the form of carbon emissions, whether you're tooling down the highway or cruising at 35,000 feet (10.7 kilometers).

Putting all these factors together and optimizing them is a complex equation to be sure. So first, we'll provide you with some of the inputs: (costs between types of vehicles)

In the next section, we'll look at how to figure out which is cheaper -- driving or flying -- using the help of some high-tech shortcuts.

Figuring Out if it's Cheaper to Drive or Fly

If your head is spinning in an attempt to wrap itself around all the variables in a "drive versus fly" decision, here's some good news: online you can find a number of trip calculators that help you figure it all out. There are calculators for determining your vehicle's mileage, current gasoline prices, airline fares (also known as discount fare sites), and even how a driving trip and an airline flight stack up to one another.

We used a calculator from Befrugal.com to help make the "fly or drive" decision for two hypothetical households considering a visit to Orlando, Fla. from their homes in Herndon, Va., during the same week in July. "Tyler" drives a relatively fuel-efficient Ford Focus and is headed south by himself to visit relatives near the Magic Kingdom. The "McGowan" family of five owns a Toyota Highlander SUV and wants to take a family vacation with Mickey and the gang.

What about the McGowans? It would take them nearly the same amount of time as Tyler (even though we know kids demand more frequent "bio breaks" -- but work with us, here). Their flying tab would weigh in at a whopping $1,240, versus $832 driving the family SUV and staying a night in a motel. That's more than a $600 savings that could go toward funnel cakes and souvenirs! Winner: driving.

Sometimes the bottom-line dollar figures are so close that it isn't clear which is the better choice. In that case, the decision whether to fly or drive will boil down to very personal preferences. Some people don't mind the lengthy waits, along with all the mandatory scanning, patting and shoe removal that accompany modern-day commercial flying. Others consider the journey itself worthy of savoring, and relish the time in the car with family or friends as a precious opportunity to deepen their bonds. Some thrifty people are willing to spend several extra hours on the road in their quest to "squeeze a dollar 'till it hollers." And yet for others, the speed and convenience of a quick flight are worth paying a bit extra.

One last thing -- we've looked at flying versus driving yourself, but don't forget those other over-land travel options -- the bus and the train. Both modes of transit have witnessed notable developments in recent years, including the addition of electrical outlets, Wi-Fi Internet access, and in the case of bus travel, significant fare discounting that could make the economic decision an easy one, depending on the route.

For more information that can help you decide whether to fly or take a road trip, go to the next page.

Online tools to help you decide: Fly or Drive?

You could snap a lot of pencils trying to crunch the numbers yourself in figuring out whether to fly or drive. But thanks to the Internet, the hardest part has been done for you. With these online calculators, all you need to do is enter some basic information that you probably know off the top of your head. And now for the disclaimer: these sites typically say they're for information purposes only, so don't blame them (or us) if their answers don't match up to the ones you produced using your own formulas. BeFrugal.comlets you enter vehicle make, model and travel information then compares the calculated cost with current airline prices; also compares carbon dioxide emissions for each mode of travel. CostToDrive.comfigures out how much you'll pay to drive from one U.S. city to another based on your vehicle model. AAA, the drivers' advocacy membership group, offers its online Fuel Cost Calculator to members and non-members alike.