by Melanie Radzicki McManus
Prev NEXT
9

Create and Map Out Your Itinerary 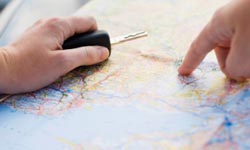 Even if you don't plan every little stop on your cross-country trek, you need a general idea of where you're going and how you'll get there.
Polka Dot/Thinkstock

Step one: Figure out how many days you have for travel and where you want to go, but don't simply plot out the fastest route from point A to point B. While major highways and interstates quickly whiz you from city to city and state to state, scenic byways and county roads afford the best sights and out-of-the-way attractions. So make sure your route occasionally deviates to include some of them. Check out the federal government's America's Byways Web site for ideas.

Step two: Don't set an overly ambitious agenda. The trip won't be any fun if you're driving 10 hours a day and don't stop to see anything along the way. Plan on a maximum of five or six hours per day behind the wheel [source: Planning Fun Road Trips].

Finally, take along a current map, in addition to any online directions or GPS systems. Each is a good backup to the other, as none is foolproof.