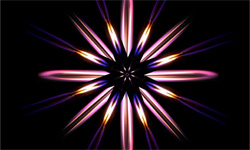 Flames of fire act differently in space than they do on Earth. That's another thing that researchers at Glenn study -- microgravity combustion research.
Photo courtesy NASA

Without Glenn (the place, not the man), space shuttle engines might melt, and Hubble might develop holes. At this Midwestern spot, scientists study what materials to use to make space equipment. Space, and getting there, tends to involve extreme environments. Main engines on space shuttles, for example, can reach 6,000 degrees Fahrenheit (3,300 degrees Celsius) and require ceramic parts that can take the heat [source: MSFC].

Heat isn't the only issue. Shuttles also have to resist the corrosive atomic oxygen in space, and for that, Glenn is checking into Teflon. Astronauts need special outfits, too. Researchers here are developing space suits that, after a good pummeling with moon dust, can still shield astronauts from UV rays and X-rays. The "lab" for all of these studies is awesome: Astronauts hang material swatches off the International Space Station and see how they do.

These materials masters also test fuels -- liquids, gels, ion thrusters -- anything that can blast a shuttle into space faster and for less money. And since you can't just plug into a wall outlet in space, Glenn works on power problems. They built the solar panels, batteries and electrical systems for the International Space Station.

Interested? Power yourself over to the Great Lakes Science Center in Cleveland, where you'll find Glenn's visitors' center. Admission is $9 to $11 [source: GLSC]. We also recommend Glenn's free tours of its own facilities, available between April and October with reservations [source: Glenn].

NASA doesn't just shoot items into space. It also studies what's out there, often with the aid of space telescopes. Drive southeast to meet some of its eyes on the sky.