by Jonathan Atteberry
Prev NEXT
8 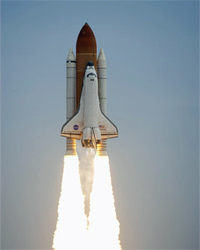 With the last space shuttle launch complete, Kennedy Space Center might not receive as much media attention as it has in the past, but that won't stop its 1.5 million annual visitors from heading to the space center's incredible Visitor Complex, located just outside of Orlando, Fla. [source: Kennedy Space Center]. Short of working for NASA, you'll probably never get a more in-depth look at America's space program than the one the space center provides.

Visitors get to tour actual launch facilities used during the space shuttle program, watch films about NASA in IMAX theaters and dig through an extensive collection of vehicles and equipment that starred in NASA's history. After all, nothing helps you appreciate the engineering brilliance behind manned spaceflight quite like seeing an actual Saturn V rocket in person. You can also get an unparalleled look at what it's like being an astronaut by climbing into Apollo, Gemini and Mercury space capsules or experiencing a simulated shuttle launch. And while many were sad to see the end of the shuttle program, there's one upside for Kennedy Space Center visitors; after it's been decommissioned, Atlantis will be on permanent display here for space shuttle enthusiasts.

The next landmark on our list brings us back to Earth -- or its atmosphere, at least. Read on to learn about a place where talking about the weather isn't just casual conversation.