by Jonathan Atteberry
Prev NEXT
9 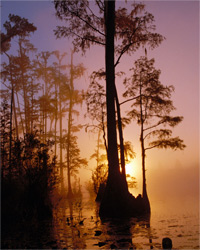 The Okefenokee Swamp wasn't always the wildlife refuge it is today. For more than 3,000 years, Native Americans depended on its abundant resources for survival. After the last Seminoles were driven from the swamp in 1842, the territory was turned over to commercial interests, but the land proved too treacherous to turn into cotton, sugar and rice plantations. The Okefenokee National Wildlife Refuge was founded in 1936, preserving one of the richest ecosystems in the United States.

Budding biologists and anyone else with an interest in Earth's incredible biodiversity may find Okefenokee Swamp just as thrilling as any theme park. Guests can check out the 5,000-square-foot (465-square-meter) visitors' center, filled with information and exhibits like an underwater view of the area, but you'll have to venture into the swamp itself to truly appreciate Okefenokee.

Located on 438,000 acres straddling the border between Georgia and Florida, the swamp is home to more than 600 species of plants and 400 species of animals, including numerous endangered ones, like the indigo snake and the gopher tortoise [source: U.S. Fish and Wildlife Service]. As you'd imagine, this spot has its fair share of predators; bobcats, black bears and an estimated 13,000 alligators call the swamp home [source: Stripling]. Fortunately, several companies offer guided tours, allowing prudent souls the chance to see Okefenokee's wildlife from the safety of a boat.

Exploring the refuge can make you feel like you're on another planet, but if you're actually interested in space travel, you'll need to head to the next destination on our list.