by Jonathan Atteberry
Prev NEXT
10 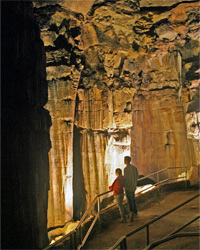 You, too, could check out the ruins of Karnak inside Mammoth Cave if you visit this treasure trove of geological marvels.
Photo courtesy National Park Service

Anyone with a passion for geology should consider a trek to Mammoth Cave, located about 100 miles (161 kilometers) south of Louisville, Ky., mandatory vacationing. This national park lives up to its name; with nearly 400 miles (644 kilometers) of passageways, it's far and away the planet's longest cave [source: National Park Service]. While visitors have explored Mammoth Cave for thousands of years, it wasn't until the Roosevelt-commissioned Civilian Conservation Corps (CCC) built 24 miles (39 kilometers) of trails into the caves that the park became a major tourist destination [source: Western Kentucky University]. Thanks to their work, Mammoth Cave attracts around half a million visitors every year [source: National Park Service]. Those folks are treated to breathtaking views of stalagmites, stalactites, gypsum flowers and every other cave formation known to man.

Don't worry if you're not a seasoned spelunker. Mammoth Cave has something for every type of adventurer. If you're looking for a leisurely walk through the caverns, for instance, you can take the Frozen Niagara tour, an easy, hour-long walk that takes you past the Crystal Lake, the Moonlight Dome and the Onyx Colonnade on the way to a spectacular view of the Frozen Niagara flowstone. For the more adventurous, there's the Wild Cave Tour, a six-hour trip that takes you through claustrophobia-inducing passageways -- some only 9 inches (23 centimeters) high -- on your way to features like Thorpe's Pit and the Cathedral Domes [source: National Park Service]. Once you're finished exploring the caves, you can go horseback riding on nearby trails or kayaking on the Nolin River, which will give you good practice for navigating the swampy waters of the next spot on our list.