Our Top 10 Stops on A Fossil Road Trip

by Michael Franco
Prev NEXT
6 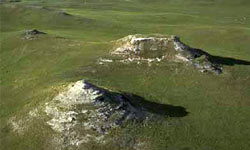 At Agate, you can actually see the petrified home of the now-extinct palaeocaster, or ancient beaver.
National Park Service

At most fossil sites around the world, you can see the preserved bones of animals that once roamed the Earth. At Agate (named after a type of moss that grows there), you can actually see the petrified home of a now-extinct animal. The palaeocaster or "ancient beaver," dug 6- to 8-foot corkscrew tunnels into the Earth that led to its den. First found in 1892, the twisted stone was once thought to be the root of a plant and was given the colorful name of Daemonelix, or Devil's Corkscrew.

Of course, that's not the only fossil you can see at Agate. The land preserves the skeletons of animals that lived about 20 million years ago -- during the Miocene Epoch -- including the Dinohyus or "terrible pig", which was a cross between a bison and a pig, and the Menoceras, the small predecessor of the modern rhino.

The visitor's center displays actual or re-created fossils and has a diorama of mounted skeleton replicas. The 2.5-mile Fossil Hills Trail circles around the area where "The Great Bonebed of Agate" was discovered in 1904 and has signposts that identify historic and geologic features.