Our Top 10 Stops on A Fossil Road Trip

by Michael Franco
Prev NEXT
9 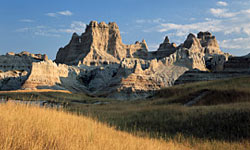 The reach the next destination, you'll have to do a lot of driving through Kentucky, Indiana, Illinois and Iowa -- but it will be worth it when you get there -- Badlands National Park in South Dakota.

The very thing that gives this haunting region its name -- a wind-ravaged landscape of exposed stone -- makes it good hunting grounds for fossil seekers. The tall stone pillars are veritable history books of geologic and biologic activity in the region beginning with the Cretaceous period (75 to 67 million years ago) where fossilized clamshells are trapped and a yellow, fossilized soil known as paleosol can be seen, followed by the late Eocene Epoch (37 to 34 million years ago) that holds the remains of large rhinoceros-like animals called titanotheres, and then finally the Oglicocene Epoch (34 to 26 million years ago million years ago) where the remains of sheep-like mammals known as oreodonts have been found [source: National Park Service].

If you are visiting the park in the summer months, don't miss a stop at the Big Pig Dig -- an archeological site first brought to the attention of scientists in 1993 by tourists who saw a large hipbone sticking out of the ground. The creature to which that bone once belonged was identified as a hornless rhinoceros known as a Subhyracodon (it was originally thought to be a pig, thus the name) and the site has been a treasure trove of fossil discoveries ever since. Today visitors are able to watch paleontologists at work unearthing, cleaning and tagging new-found fossils. The dig site is near the Conata Picnic Area.