by Sarah Winkler
Prev NEXT
10 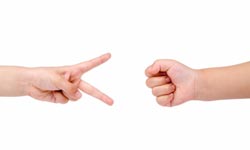 The winning player makes the gestures of the object that will defeat the opponent's object. In other words, since a rock can destroy a pair of scissors, rock beats scissors. Scissors cut paper, so scissors beat paper. Since paper can cover a rock, paper beats rock. If opponents use the same gesture, the game is tied.