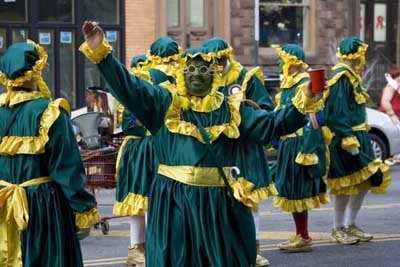 Take the extravagant costumes of a New Orleans Mardi Gras parade and add even more sequins, feathers, and fabric. After all, the Mummer Parade takes place on New Year's Day, when the weather in Philadelphia can be frosty, if not downright freezing. Then add string-band music, dancing clowns, elaborate floats, brass bands, and an extra dose of humor, and you have a Philadelphia institution that dates back to the late 1700s when Swedish immigrants began the tradition as part of their Christmas celebration.

The parade consists of three divisions: the Comics, a collection of costumed dancing clowns, jesters, and satirical performers; the Fancy Costume Brigade, outrageously dressed in satins and plumes; and the String Bands, with marching musicians in eye-catching costumes performing precision drills while they serenade the crowds. They move through the streets with a distinctive gait called a cakewalk, or strut. Many of Philadelphia's Mummers spend the entire year practicing dance and band routines and constructing their elaborate costumes.

All groups are judged at the parade's finishing point, City Hall, for overall originality, best theme, and best costume. The celebrations culminate with the Fancy Costume Brigade groups performing in the Philadelphia Convention Center, an extravaganza of flamboyant costumes and intricate dance routines. If you miss the parade, visit the Mummers Museum to see some of the paraphernalia and flashy outfits worn by the paraders.