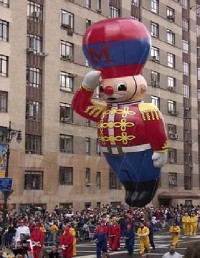 Nearly everyone in North America has heard of Macy's Thanksgiving Day Parade, with its fabulous and elaborate floats, dancing clowns, and brassy marching bands. But what it's really known for are the signature giant helium balloons featuring favorite characters such as Angelina Ballerina, the Statue of Liberty, Scooby-Doo, and Dora the Explorer. The parade heralds the start of the holiday season -- Santa Claus rides along in his sleigh as a special guest.

The parade's origins date back to the 1920s, when the city's European immigrants decided to celebrate the American Thanksgiving Day holiday with the sort of festivities they had known in their homelands. Now more than 40 million people watch the parade on television, but nothing beats being there in person.