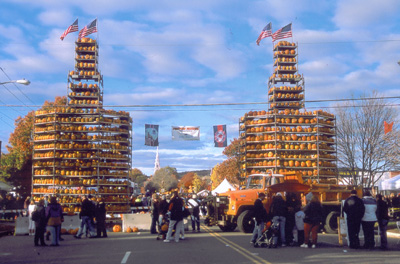 After dark, when volunteers have lit the thousands of pumpkins in downtown Keene, New Hampshire, a switch is flipped and four immense towers of carved, light-filled pumpkins blaze in the night.

During this annual festival, held in late October, there are pumpkins aplenty -- side-by-side along the streets and sidewalks and all around the gazebo in Central Square. The carved gourds take all forms -- classic peg-toothed grinners, artfully chiseled ghouls, leering witches, pop-culture celebrities, and even advertising slogans. The record for number of pumpkins lit was set in 2003, when 28,952 pumpkins were all glowing at once.

There is plenty of fun to occupy your time while you're waiting for the great pumpkin lights. The festival features trick-or-treating on Main Street, a pumpkin pie eating contest, a pumpkin seed spitting contest, a craft fair, food vendors, a climbing wall, and a kids' activity tent called Jack's House. Volunteers at a pumpkin carving station will help you create your own jack-o'-lantern. The Museum of Pumpkin Oddities exhibits the strangest pumpkins grown that year. A kid favorite, the enchanting children's costume parade is the biggest in New England, with thousands of participants.

Later, as the tea lights in the glowing orange heads begin to burn down, fireworks of all colors explode overhead.