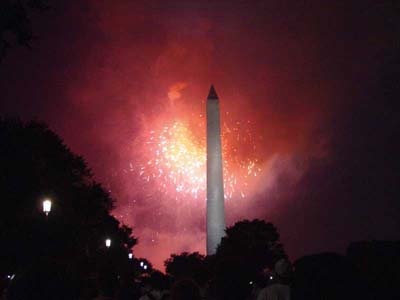 For America's finest Fourth of July birthday party, the place to be is in its capital city. The day begins with a rousing dramatic reading of the Declaration of Independence, followed by a parade complete with Marine Corps, Army, Navy, and Air Force bands; drill teams and marching groups representing all parts of the United States; VIPs; floats; and giant balloons. The parade winds down ten blocks of Constitution Avenue beside the National Mall, the capital's hub of activity.

After the parade, head into the Mall to check out the Smithsonian's National Folklife Festival, a dazzling display of music, song, dance, crafts, foods, and storytelling that celebrates the nation's traditions. Visitors are encouraged to join in with singing and dancing. Several events geared toward children are always a part of the festival.

At 8:00 p.m. the National Symphony Orchestra and other top-rate guest performers get the crowd in a patriotic mood with favorites such as John Philip Sousa's "Stars and Stripes Forever" and the "1812 Overture" in front of the U.S. Capitol. The grand finale is an amazing fireworks display against the picturesque backdrops of the U.S. Capitol and the Washington Monument.

Hours of Operation: 4th of July, All Day