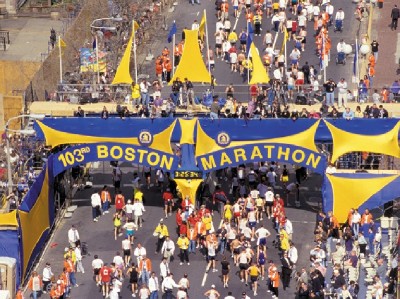 Runners take off from Hopkinton for the Men's Open. The Boston Marathon is held each year on Patriots' Day

The first Boston Marathon was run in 1897. For a sense of perspective, consider that its closest rival, the New York City Marathon, was started in 1970. The pioneering Boston Athletic Association (BAA) was the primary inspiration for the event. Chartered in 1887, the association provided more than half the U.S. Olympic team to the first modern Olympics in 1896. The next year, it was ready to stage its own BAA Games, the culminating event of which was a 24.5-mile marathon.

The first winner was John J. McDermott, who finished in 2:55:10. The fastest finish in a modern Boston Marathon of 26 miles, 385 yards was Robert K. Cheruiyot, in 2006, with a time of 2:07:14. But the most beloved would have to be Johnny A. Kelley, a winner in 1935 and 1945 who finished a record 58 of the 61 Boston Marathons he ran. Kelley died at age 97 in 2004. The most famous loser was amateur Rosie Ruiz, who in 1980 appeared to be the women's winner. But when the videotape was later examined, it revealed that Ruiz had cheated, slipping into the pack about a half-mile from the finish line.

As a matter of tradition, the Boston Marathon is held annually on Patriots' Day, the third Monday in April. So join the roughly half-million spectators who line the marathon route from Hopkinton to Boston each spring to cheer on the runners -- especially the rookies. Supply them with water, snacks and have a ball!